A crash fest was the order of the evening at the second session of the UCI BMX World Championships in Auckland, New Zealand tonight.

In three of the men’s finals most of the field hit the tarmac in the first corner at the Vector Arena.

New Zealand came away with two more titles with Adam Coker taking the 25 to 29 years class and former double national elite men’s champion Tony Wilcock successful in the men’s 30 and over class.

It was a night for the United Nations with riders from France, Canada, Switzerland, USA, the Netherlands, Australia and Ireland also successful.

Colin Hudson, the defending champion, took the 16 boys’ title, despite starting from the unfavoured lane eight. He was helped a little when three of his rivals crashed in the first corner and then claimed the win on the last bend coming from third as France’s Romain Racine and Bruno Andrade Cogo (Brazil) opened the door while they tussled for the lead.

It was Hudson’s fourth title in a row at World level and seventh visit to a world podium.

There was a bigger pile-up in the 15 boys’ race, with six of the eight starters going down in the first turn leaving Alex Tougas of Canada to take the win.

And half the field crashed in the 30 and over men with Wilcock (Hamilton) winning New Zealand’s second title of the night.

Coker was impressive in his victory going undefeated through 3 motos, a quarter, semi and the final.

“I had a good day right from my first lap, I felt it was on. It’s awesome to have family and friends supporting was special.”

And Ireland claimed its first ever title at a BMX World’s when Kelvin Batey took the Master’s class from the more fancied Argentine pairing and former elite class riders Christian Becerine and Javier Colombo who crashed in the first corner, along with three others.

“The sport is coming on a lot back home, so this is another step in the right direction and hopefully will bring more people to BMX.” 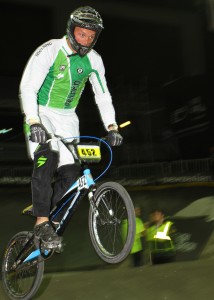 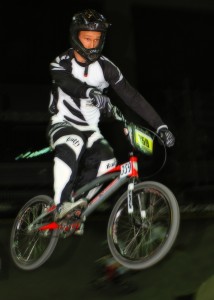 The women did not ride quite as aggressively and stayed on their bikes, with Axelle Etienne (France) winning the 15 girls from Kiwi Zoe Fleming second. Local rider Tahlia Hansen repeated her second place of 12 months ago behind Switzerland’s Christelle Boivin who “felt good even after all the travel to get here.”

Robin Van der Kolk from the Netherlands repeated his Birmingham 2012 win in the 17-24 year men’s class, winning all but his eighth final when he unclipped from his pedal during the four hours.

“It was pretty tight racing – the track is so small, so you have to be in front from the gate. I’m stoked right now after defending my world title”

It was third time lucky for Australia’s Madison Janssen in the 17 and over women’s class after finishing runner-up at the 2003 Perth and 2008 China Worlds.

Tomorrow is the turn of the youngsters with the five to nine years categories in the morning ahead of the Cruiser class, for the larger 24” diameter wheeled bikes, in the afternoon.

Friday allows for a change day for the track for the elites with time trials on Saturday and racing on Sunday.