Matt Hadan knows his way around a BMX track, he’s been in the sport for 20 years and he is just as much a threat today as he ever was. Matt is a family man, a AA Pro BMX racer and he still finds time to enjoy a game or two on the Playstation. 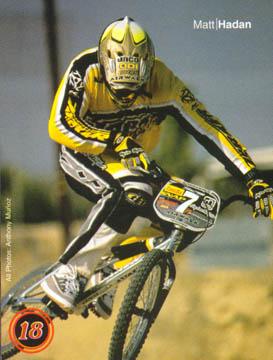 bmxultra.com: How did you get started in BMX?
Matt: When I was 10 my dad bought me a Redline. He took me to a local track. I watched and thought it looked like fun. That was 20 years ago.

bmxultra.com: When and where was it?
Matt: It was in Azusa, California. That’s where I lived so it was easy. That was in 1980.

bmxultra.com: What was your first bike?
Matt: It was a Redline MX2. It was red with gold parts. A very cool bike.

bmxultra.com: Should we expect anything new from Torker as far as new stuff in 2000?
Matt: The Pro XL is pretty much the same, but they are now making Jr’s and mini’s, and another Cruiser.

bmxultra.com: How is it the Torker is such a popular racing bike now when it looks like an alloy version of a freestyle frame that’s about a 20 year old design?
Matt: I think parents who used to be into BMX and now have kids racing know that Torker is a name they can trust. The bike looks sturdy and strong, and people want that.

bmxultra.com: What is your highest ranking at the World Championships?
Matt: I won a World Champ in Florida in 1986. In pro I finished 2nd in Michigan and 3rd in Canada and 3rd in France. I also got 3rd in  cruiser in Australia.

bmxultra.com: What was the deal at the 98 worlds in Melbourne where you and Christophe Leveque didn’t turn up to the cruiser presentation, did you really get fined? What really did happen there?
Matt: Many of the pros that race cruiser in UCI feel that they need to pay us a purse. They never do it. So in Canada the year before we talked about it, and decided not to show up. Christophe and I did it, everyone else chickened out. No, we were not fined.

bmxultra.com: What do you think of a single world championship meeting and not a series?
Matt: I think it’s exciting, but not a true judge of who is the best.  Many things can happen in one day.

bmxultra.com: Why do you think the world championships are being supported more by the US riders? Is it personal or corporate pressure?
Matt: It’s personal. Most guys want a World title out there on their resume. Most pros have world bonuses that are big so you can’t pass up the money. If you win it you make $20,000 in one day.

bmxultra.com: What is your favourite country to race in?
Matt: I can’t say I have one favorite country. One of the greatest parts of this job is getting to travel all over the world. I can’t compare the places I have been, there is something special about each one.

bmxultra.com: What kind of music do you listen to?
Matt: Rock and Rap.

bmxultra.com: What do you think of Neal Young?
Matt: I’m not into him too much. Every time I see him he looks like he’s going to die.

bmxultra.com: What effect do you think the web has had on BMX?
Matt: I don’t know, it’s still fairly new. It’s great because you can interact with people you normally couldn’t. 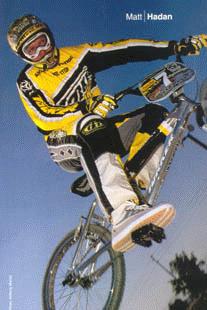 bmxultra.com: What are your favourite websites?
Matt: DoubleAMarketing, Motley Fools, and any other BMX web site.

bmxultra.com: What do you think of bmxultra.com? Did you realise it was an Australian based site?
Matt: I enjoyed going to your site, it was cool. No, I didn’t realize it was Australian until I started reading it.

bmxultra.com: What are your favourite PC/playstation games?
Matt: I’ve been playing this new Supercross Circuit. It’s a great game. I also play a lot of sports games, football, basketball, hockey.

bmxultra.com: What game are you playing the most right now?
Matt: Supercross Circuit.

bmxultra.com: Have you played Driver or Moto Racer 2? What do you think of them?
Matt: I loved Driver, but then it got boring fast. I have moto racer 2 on computer and love the graphics. If  you like MotoRacer 2 you have to get Supercross Circuit on Playstation.

bmxultra.com: Do you know of or play any BMX games?
Matt: No.

bmxultra.com: What do you think of Pete Dylewski saying you play too much Playstation?
Matt: He’s just jealous because he can’t beat me at anything.

bmxultra.com: What do you do for training?
Matt: I just ride a lot. I go to the track about 4 times a week. I also do weight training. Thousands of sprints, you can’t do too many sprints.

bmxultra.com: Is it hard to balance training and game playing with family life?
Matt: Oh yeah. I train in the morning, then I am a family man in the afternoon, and then I go to the track at night. Then I play games sometimes after they go to bed.

bmxultra.com: Do you think it is important to eat the right food?
Matt: It’s very important. Food is your battery. You use it run on. I eat no junk food and stay away from fast food. Tons of vegetables and salads, and chicken and fish.

bmxultra.com: What gearing/crank length do you run? Did it take you long to work out that was the right combination for you?
Matt: I run 180 cranks with a 44/16 gear. I would like 182 cranks but Redline doesn’t make them. It took a while to figure out what worked.

bmxultra.com: If there was anything about BMX you could change what would it be?
Matt: I would like BMX to be more like Supercross with big jumps and lots of turns so it would be more fun to watch. That way, it would be on T.V. more, meaning more sponsors.

bmxultra.com: Where do you see BMX in 5 years time?
Matt: I think it will be the same. There’s too many people making the decisions that are either clueless or greedy. They’ll never help the sport grow, or maybe they’re just afraid it will grow too much and get out of their hands.

bmxultra.com: What do you see as being the most significant change in BMX in resent times?
Matt: All of the European and Australian pros coming over here to race. It makes every Pro race a World Championship. It’s been big for BMX.

bmxultra.com: Which rider do you fear racing the most and why?
Matt: I don’t fear anyone. There are some guys that ride over their heads. I don’t enjoy crashing with someone because he made a silly mistake.

bmxultra.com: Any pointers for someone out there thinking of turning Pro?
Matt: I think if you feel you’re ready to turn pro, then go for it. But you need to understand that it’s a huge commitment. If you’re not prepared to live it, don’t turn pro. It’s too hard to go and race half-heartedly, you have to give it your all.