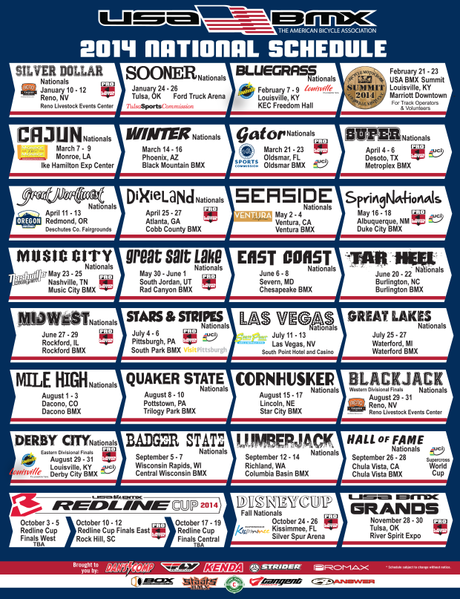 USA BMX is pleased to announce all 29 stops in the 2014 National Schedule. While we will be returning to many of the towns that we have worked with in the past, USA BMX is also thrilled to add some first-time locations and return to previous facilities. Among the big changes, USA BMX has listened to the membership and added national events in the states of Washington, Michigan and Colorado. Other towns and states – such as Reno and Louisville, California and Pennsylvania, will be getting two events this year.

Among the new stops on this years’ schedule – one of the most anticipated will be the Seaside Nationals – in Ventura, California. Located right on the Pacific coast and a stones-throw away from a water park, the Ventura event will be a welcome change of venue.

The PRO schedule for 2014 has also seen some positive changes. National in Georgia and New Mexico will host Pro races – and best of all, the Redline Cup Finals East will play host to the Pros in October.

In all, there will be 13 pro weekends – with 5 of those providing UCi points.

…and there it is, folks! Mark your calendars and start making your reservations.