The pair jumped off Auckland’s Sky Tower this morning after flying in from their training base near San Diego, one of the first international teams to arrive for the World Championships at Vector Arena from 24-28 July.

Fields, 20, is one of the hot favourites for honours in the world championships with Nobles coming in ranked 12th in the world on some outstanding form this year.

“There’s no doubt that these world championships are in probably the most spectacular venue we’ve competed in, being right downtown here in Auckland,” Fields said.

“We got a great view of it all from the top of the Sky Tower and the SkyJump was definitely an  exciting thing to do especially after just landing in the country.

“Tackling an 8m start ramp in BMX is pretty hair-raising but nothing like that. I think everyone heard me screaming on the way down.”

Already in his short career, Fields has four World Cup victories, five World Superfinal time trial wins before last year’s world title at Birmingham and was a finalist in the London Olympics.

“I have never been to New Zealand but I am so looking forward to it. I want to get my first world’s podium. That’s my goal to get on the podium in Auckland.

“Last year in Birmingham I won the time trial which was really cool. But this year my focus is on the race as opposed to the time trial and I feel like if I perform at my best then I should be on the podium and that’s my goal.”

Teammate Nobles, 26, said he has long wanted to come to New Zealand and the SkyJump was a spectacular way to start.

“I’ve done sky diving before and this was pretty awesome too. It’s great to come here early to settle in and see some of the country.

“I usually like to keep it all pretty chill but I am definitely targeting a big performance next week.” 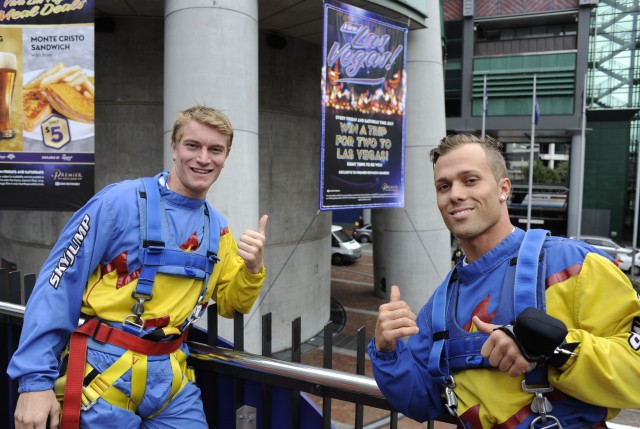 During the SkyJump – one of the world’s longest land based adventure jumps – the American pair fell 192 metres in around 11 seconds.

Back on earth they rejoined their team and will begin training at the Sunset Coast BMX Track in Pukekohe tomorrow.

The Championships begin with the Challenge class (age group) on Wednesday 24 July and Thursday 25 July, with elite practice on Friday ahead of the time trial world title decided on Saturday 27 July and finals on Sunday 28 July.

ATEED is a major sponsor of the UCI BMX World Championships.   It is one of the 35 events that ATEED is supporting as part of its major events sponsorship portfolio for 2013/2014.

To find out more about Auckland: www.aucklandnz.com