The 32nd BMX World Championships will be staged in the world-class Vector Arena on Auckland’s waterfront from 24-28 July.

The move to indoor arenas for the sport has become more common, offering an all-weather spectacular for competitors and fans alike. 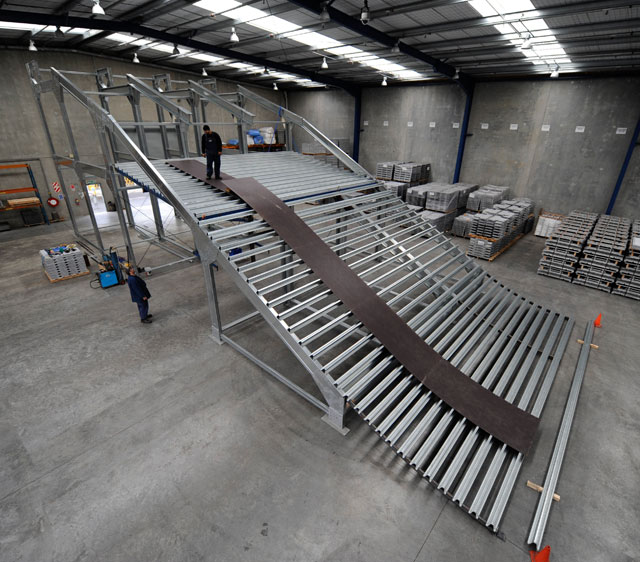 However it can create challenges for the track construction. For the past three years there have been two separate starting ramps built for the BMX World Championships – an 8m ramp for elites and 5m ramp for Challenge (age group) racing.

The confines of Vector Arena meant there was insufficient room to build two separate ramps, meaning that the event’s operations manager, Tony Takarua from Elite Racing Developments New Zealand had to come up with an innovative solution.

The indoor track at the Vector Arena will include three tracks in one, with all classes sharing the same starting ramp and first straight. It is the first time since the introduction of two different starting heights for Challenge and Elite riders, that the two classes will share the same ramp.

After the two days of Challenge (age group) racing on Wednesday July 24 and Thursday July 25, the start ramp will be modified from five metres high to eight metres for the Elite racing at the weekend. At the same time the first straight will undergo slight modifications in order to host the weekend competitions.

“We came up with the concept of building a single split-level ramp structure with a longer platform for the 5m ramp,” said Takarua. “After Challenge races, with the use of hydraulics, the 5m ramp is repositioned to 8m.

“We are really pleased with the concept. We have built and tested it out and I think this could become a blueprint for cities around the world that want to run the championships in indoor arenas.”

Takarua is well known for his track building skills, having led the construction of New Zealand’s sole Supercross track at Pukekohe, the first permanent track to run Elite and Challenge ramps and tracks side by side and the first to use adjustable jumps.

His team will build the ramp and provide the construction team for the track, to be managed by the London Olympic track builders, Clark and Kent Contractors.

The English company has been involved in many projects with multiple national tracks in England, USA, remedial work at the World Cycling Centre at Aigle in Switzerland and the track for the London Olympics which won them worldwide acclaim.

Construction of the track in Vector Arena will take six days involving approximately 10,000 pallets and 60 truck and trailer loads of specially prepared dirt.

Organisers expect more than 2000 riders from 30 countries for the championships, although entries to not close until 12 July.

The Championships begin with the Challenge class (age group) on Wednesday 24 July and Thursday 25 July, with elite practice on Friday ahead of the time trial world title decided on Saturday 27 July and finals on Sunday 28 July.

Captions: Event Operations Manager Tony Takarua with finished plans of the ramp, and the framework of the ramp to be used for the UCI BMX World Championships.