What’s not to love about Alienation BMX? We’ve had a close look at a number of products from their range over the past couple of years, including the Bullitt and Royal hubs and the Moto, Ratchet and Backlash grips. Each item we’ve looked at has been absolutely flawless.

There are so many BMX companies, old and new, that will just run with the herd. Alienation isn’t one of them, they are a true innovator. They take a fresh new approach with everything they apply themselves to. And they never seem to rush anything either. For example, I first noticed them mentioning a Clutch hub, that would be dead silent instant engagement and easily changed from right side drive to left side drive by just removing the clutch system, flipping it around and putting it back in. That was about two years ago and I’m still waiting to see them, but I’m sure they’ll be worth the wait.

In the race scene there are two brands currently dominating the rim market, Sun Ringle and Alienation. After running Sun Ringle rims many years now it was time to try Alienation. I was after a new 20″ wheel set and a 24″ wheel set. A few months ago Alienation and the Australian distributor, ECI, sent a 20″ wheel set with polished Royal hubs and polished Deviant/Runaway rims for review and shortly after that I personally built up a 24″ wheel set with the red Bullitt hubs and polished Deviant/Runaway rims.

Before we get started, you may have noticed we are reviewing the Deviant and Runaway rims as a combination. Alienation rims are sold separately, there’s nothing to stop you pairing a Runaway or a Deviant with a completely different rim, but it’s very common to find these two paired up, which is why we are reviewing them as a pair.

The Deviant rim is one of the lightest rims you will find in the BMX scene, full stop! It’s front specific because it has no braking surface. The rounded shape of the rim provides the strength. I have heard people talking about building a Deviant rim into a back wheel, but never seen anyone successfully pull it off. I have also heard that there is a rear specific Deviant rim on the drawing boards, but as far as I know that’s just a rumour. 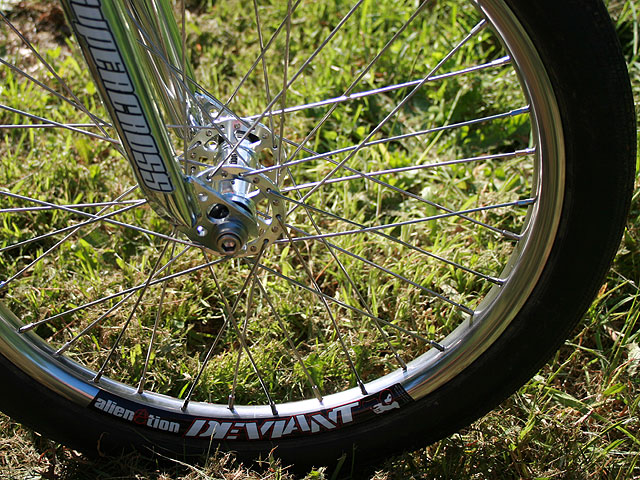 The Runaway is a stiffer and stronger rim, that’s slightly heavier, which makes it perfect for the rear wheel, which will take a real beating over time. The braking surface has a deeper wall than the Sun Ringle ENVY rim, meaning that you have slightly more adjustment in where you can run your brakes and allowing you to run bigger brake pads if you feel the need. I did notice the CNC’s braking surface isn’t perfectly smooth on the Runaway rim, if you run your fingernail on the rim wall you will feel tiny ridges like the grooves on an old vinyl record, meaning more braking surface area. I’m sure that’s the main reason the brakes seemed to work better.

I’m not a light guy by any stretch of the imagination, I have a build that’s more suited to American football or wrestling than racing a 20″ bike, but I’ve never let that get in the way. I’m the kind of rider that would rather go riding the jumps in the backyard or at the local track than doing sprints or any formal training. I may not hit any pro sections, but I like to get the wheels off the ground. I have been known to case the odd jump as well … more frequently than I care to remember. I’m pleasantly surprised that, after months of riding, both rims are up for the abuse. Both rims are still in perfect condition.

Not only do the rims work well they look great too. 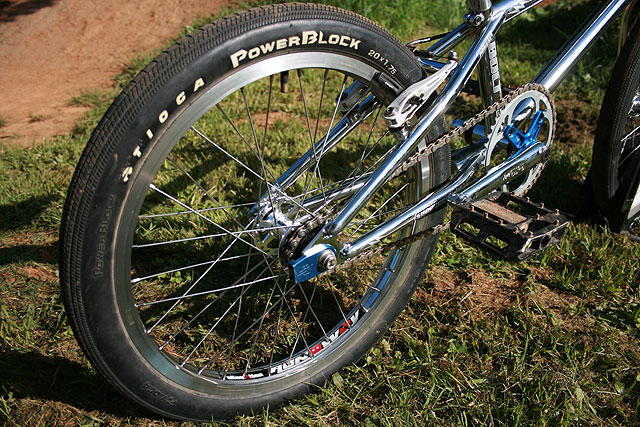 Compared to the Sun Ringle ENVY rim the Deviant and Runaway the Alienation combination works out lighter, approximately 90g lighter for both 20″ and 24″. Check this out.

If I was to choose between an Sun Ringle ENVY and Alienation Deviant/Runaway rim set, it’s a tough decision. The price is around the same. The weight difference, even if it’s not huge, might be all it takes to push me over the edge. Better braking is another bonus. Also, I had a heavy case on my ENVY rims that lead to them being a little bit out of shape, which is only small but annoying when you are trying to feather the brakes. I’m yet to have that problem on the Alienation rims.

The thing is the Deviant and Runaway rims aren’t exclusively for racing, they are just as well suited at the skate park, at the local trails and everything else in between. I highly recommend Alienation rims.