I must admit, after racing BMX for 30 plus years I’ve never really worried too much about the tubes I put on my bike. I just buy cheapies, for me they are a throw away item. If I get a puncture I throw the old tube out, put a new one in and move on, patches can be unreliable and I don’t have the patience for them anyway. When it comes down to it, it probably takes 5-10 minutes to fix a puncture, so to me it’s worth the $5-7 of a new tube. Running 80 PSI front and back, I rarely get a puncture anyway. 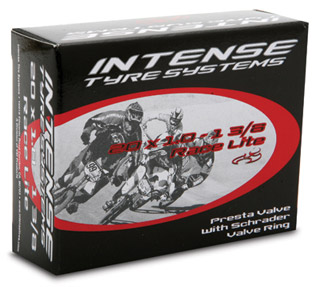 I’m always reminded of people saying things like “Rotating weight is the most important weight on your bike. To make you go faster, a general rule is to start with the tires and work in, with rims, spokes, and hubs next.” but until now I hadn’t thought too much about it.

I was building up a new set of wheels and decided I have a light weight wheel set so I’ll throw in some light weight tubes, the first set of tubes that came to mind were the ITS BMX race tubes. I had a few friends who had been using them so I wanted to see what all the fuss was about.

When I first saw them in the box it was hard to believe that a tube would fit into such a small space. The box was about half of the size I was used to seeing. The other difference was the presta (or “french”) valve. It’s not such a big deal though, because just about every floor pump these days can take either type of valve. Actually I was pretty happy with the presta valve because I don’t run valve caps and have got dirt in my schrader (or “car”) valves a few times over the years which caused air to leak slowly. The presta valve is protected from anything like that with the built in lock nut. It’s the lock nut that makes the presta valves a little more cumbersome, especially if you have big clumsy fingers.

It’s hard to go on about the performance of the ITS BMX race tubes when after all, all they are doing is keeping air in your tires. Well they do that well. The major benefit is they are around half the weight of a regular tube, prefect for the weight weenies, but also they’re not a lot more expensive than a regular tube.

Question is: would thinner tubes mean more punctures? Providing you keep your tire pressure up you shouldn’t get any more than you normally would. Just make sure you check the pressure regularly to avoid pinch flats.

Oh and do my wheels feel lighter? I don’t notice it, it’s only a matter of maybe 100 grams per tube, I’m sure the scales would pick up the difference though.

ITS is distributed in Australia by Elite Cycle Imports (ECI) www.eciimports.com