USA brand Doublecross Bikes entered the BMX race market around 2011. Looking back over the past few years they were slow to get market penetration, then we see BMX Superstars Dominique Daniels and Bubba Harris on board and it seemed to be a real spring board for the smaller manufacturer. Manufacturing was moved offshore, reducing the price, and the product range was increased to include bars, stems and more. Things appear to be going well for Doublecross bikes now, despite the polarising effect these frames have on the wider audience. Probably more than any other frame that I remember in recent years. People either love or hate the idea of the extra chain stay. I saw it come into the sport on the Elf the first time around in the mid 90’s, that’s right it’s not a new idea. At the time it wasn’t something that made me go out and grab an Elf right away.
When opportunity arose to check out a very special Doublecross Pro XXL frame we couldn’t help but to get a little excited. The anodizing job matches Australian national junior elite champion, Jade Parker’s, “Australia bike” that she used at the 2014 World Championships. The Pro XXL boasts a 22″ top tube which is favoured by our freakishly tall (6′ 4″) A Pro team rider Dane “The Daneosaur” Anderson, so he was the perfect guy to check it out. After a few weeks of riding the DX frame with his own parts this is what Dane had to say about it.
To be fair I don’t know too about the Doublecross brand. The frames have a unique looking rear end, they appear to pride themselves on the cool anodised finishes and colour ways and have quite a following throughout the BMX scene. As with all frames, it’s a personal preference as to what you like. When I first unwrapping the Doublecross from the box I immediately loved the colour. The anodised green/yellow finish really stands out, and is quite unique… although it may not be to everyones taste. It would definitely be a great colour choice to represent Australia at a world championship event. The rear end is “full on”! and screams rigidity, but at the cost of the balance of the frame. When compared to other frames on the market, the Doublecross is very weight dominant in the rear, and doesn’t have that nice balanced feel. Another thing I noticed was that it uses and old school style pressed in headset, which was a bit of a shock considering we are in 2014, and with the retail cost of the frame I was expecting at least an integrated headset. The bike went together with no problems, and the weight of the complete bike was 200 grams lighter than my current race bike (A GT Pro XXXL Speed Series) . Once the bike was together, the colour way really popped! For a 22″ top tube frame, it felt very short, more like a 21.5″. The rider area was not as large as other 22″ frames on the market, this is because of the layed back seat mast, so it wasn’t going to offer me the rider area I was looking for.
I decided for the test of this frame was to put it through a sprint session, a gate session, and a track session.
Throughout the sprint session, the bike took a little bit to get used to, as the bottom bracket felt like it was a little high, and further forward to most other bikes, and was a little shorter than what I’m used to, but after a few passes I adjusted to it easily enough. It was responsive and it accelerated well.
I took the Doublecross to the Lilydale BMX track for a gate session where I could really test out the stiffness of that rear end and how it handles in the environment it was intended for. The first gate exposed how much flex there was in the front triangle of the frame. I would appear that so much R&D had been put into making the rear end so rigid and stiff, that they have not put a lot of thought into making the front of the bike equally as stiff. The front flexed… and when “snapping” out of the gate, it was noticeable that there was a significant twisting movement in the front triangle. I treated this session as a proper training session and put 100% into each start, but I was disappointed how it performed in the area that it should really shine.
The track session was at the Geelong BMX club, where I focused on track skills, and cornering. I was impressed with how stable the it felt in the air, and how it manualled. It was effortless to blast through Geelong’s 3rd straight, a tight smallish rhythm section, at speed on the back wheel, and the head tube angle was just right when entering corners, it wasn’t too twitchy yet not too slow either. With a fairly expensive price tag, I would want a frame that offers more features, such as a integrated headset, hydroformed tubing, more balanced weight distribution, and more thought put into the geometry. The finish was awesome, and it rode well once I got used to it. The Doublecross Pro XXL weighed in at 3lbs 6ozs. Since the 22″ top tube Doublecross feels more like a 21.5″ in most other brands we have compared it to the weights of other XL frames.

You could say while the Doublecross looks heavy with the extra chainstay it still compares well to some of the market leaders in the weight race. 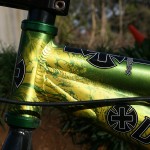 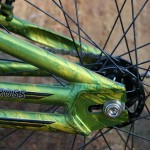 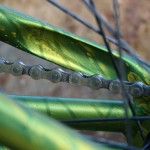 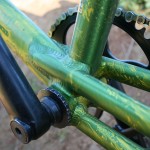 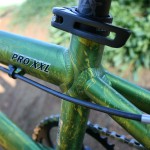 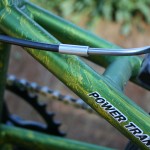 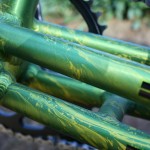 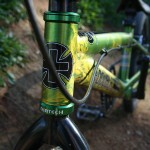 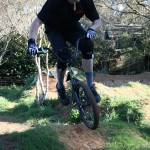 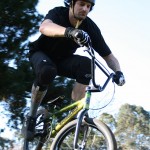 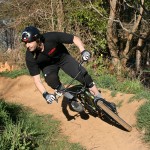 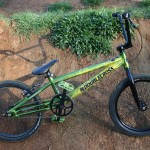 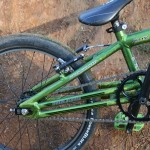 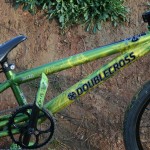 Some of the points that Dane picked up on as things that he didn’t like could be written off as personal preference.

We’re glad that Doublecross have stuck their neck out to produce something different, BMX needs more of it for the sport to progress, there’s too many “me too” companies out there.

For more information check out doublecrossbikes.com. Doublecross is distributed in Australia by bmxedge.com.au and in New Zealand through www.kbcyclesnz.com?