True fans of BMX racing will simply love the Ground Up DVD from On the Gate Films. It’s different to all other BMX racing DVDs that I have seen. It’s edited less like a documentary of events and more like what you would expect to see from other aspects of BMXing. It’s best described as an action packed extended film clip with a massive variety of footage that includes both racing and some dirt jumping. It works well. 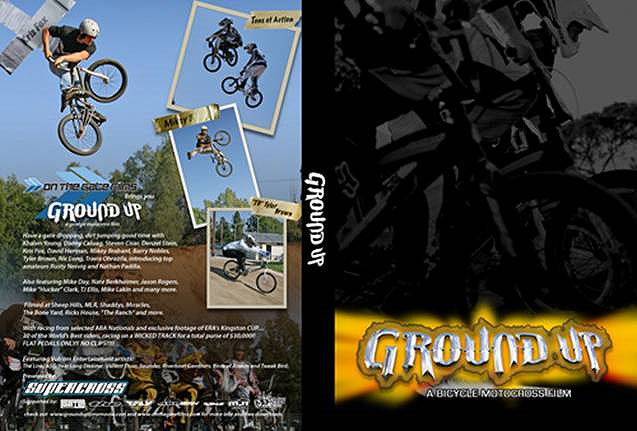 The DVD is more or less a homage to BMX that features riders based in Southern California, the birth place of BMX.

The ERA flat pedal race at Kingston in Canada is a highlight of the DVD, it’s a crazy track built by Jay Miron and Tom Ritz that we didn’t see or hear much about here in Australia. The event had $30,000 in prize money up for grabs and the rider list was much like the who’s who of BMX Supercross. There are mostly highlights from the event in the main movie, but a whole lot more footage in the special features.

Other highlights include a great crash section and Khalen Young taking out the 2008 ABA crown.

There’s not a lot more to say about the Ground Up DVD, it’s inspiring, entertaining, a must have for any BMXers DVD collection. Just do yourself a favour and buy it!

Running time is 61 minutes plus even more footage in the special features.

Check out the trailer: www.groundupbmxmovie.com

Ground Up is brought into Australia by Elite Cycle Imports www.eciimports.com.

Tags: DVDsground upon the gate