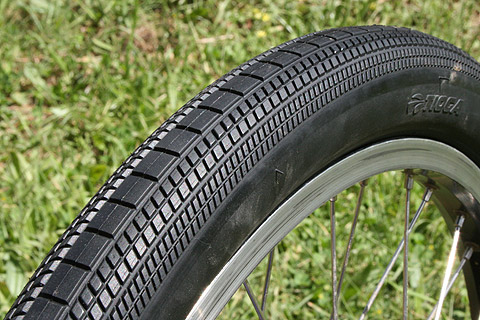 Tioga have a new Power Block tire that just might change the way we think about BMX tires, much the way they did with the Comp III tread pattern in the early 80’s. The Comp III is still relevant to BMX more than 25 years after it first hit the shelves. That’s not to say that Tioga have been cruising along all these years riding the wave of the Comp III, their tire range has continued to evolve over the years. Their most recent additions to the selection is the good all rounder the Comp X and the modernised 25th Anniversary Comp III which is a tweak of the old tread making it more relevant to today’s race tracks.

I got my hands on some of the pre-production Power Block samples and was told they had “heavier casing and steel bead (unlike the lightweight casing with folding Kevlar beads of the ‘S-Spec’ version)”. Picking up a “heavier” Power Block tire, to be honest, it’s surprising they could make them any lighter. At first glance I was a little skeptical about exactly how much tread was on the tire, and how much grip you would really get out of the Power Block, but I’ll give anything a go. I put them on the bike right away (2.1 on front and 1.75 on back). They look like they could have a directional tread pattern, but there weren’t any indicators so I just put them on the way I thought they would grip best. I was starting to get nervous about my choice to put them on right away but only because there was rain forecasted in the area for the next few days and I had a race coming up that weekend. 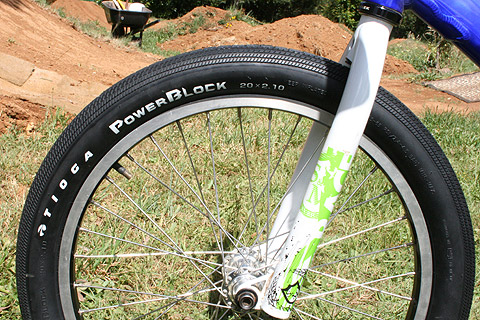 I have a 2 man BMX
track in my backyard, the track is entirely made of red clay (apart from the wooden/expanded metal start hill), which can also get slippery with rain.
And it doesn’t help that there are some new sections which are loose at the moment. So there’s hard packed sections, loose sections, and some of the new sections that are covered with carpet to help keep the loose dirt moist just so you can still ride the track. So first lap I thought I would just ride it like I would any other time and was pleasantly surprised, they hung on very well. They provided great grip right from the get go, when accelerating and taking tight turns, regardless of how well the dirt was compacted. With a race on the following day I took the bike to the race track with a crushed rock surface for a quick test
run, I thought it would be slippery because the top surface usually breaks up and you get tiny marble like stones on the surface. I just wanted to make sure I could be confident racing on those tires the next day and in the end I was 100% satisfied with the test run.

On the Sunday I entered A Pro and I needed tires I could be completely confident with and by the time I hit the track on Sunday I was. I took low lines on corners and pulled them off. I felt better when getting the power down out of the gate, out of the corners and down
the straights.

You see the Power Block tire tread isn’t designed like any other tread, most other tread patterns focus on grip alone. The Power Block not only focuses on grip but also stability through corners and maximising power transfer through the tread pattern when you put the power down. When you want to get the most out of your performance you can’t afford to waste power and give the competition the edge.

The only problem I had with them was when they were running the recommended 65 psi they felt a little flat so I just put 80 psi in them, mind you when you weigh over 100kg a little bit of extra tire pressure can make a significant difference, 80psi felt perfect…well
for me anyway. I don’t suggest running higher pressure than what is recommended by the manufacturer, it can shorten the life of the tire.

To think of what Tioga has achieved with the Power Block tire is mind blowing, mind you it’s a dry weather specific tread pattern, if you are going to ride in looser or wet conditions you might want to look at a tire with a little more bite. 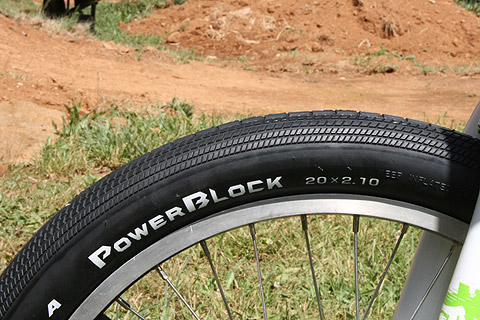 The Power Block will be available from January 2009.