Paul Knox sent through this link. We often hear stories about some of the bigger companies in BMX, often it’s the success stories. If you haven’t heard of Homestead Bicycles, don’t worry, there were only 30 frames manufactured by CycleCraft. The movie is interesting to watch as owner Alden Olmsted connects with people who rode on Homestead bikes while trying to track down the 30 that were made. Along his journey he talks to some of the biggest names from BMX’s rich past.

In 1990 Alden Olmsted’s life changed forever when he dropped out of college to start his own BMX bicycle company, Homestead Bicycles. After finding a shop in Tennessee to fabricate bikes to his design specs and using all the money he had to order 50 frames, Alden set out to promote his fledgling brand. What began with such promise would soon come crashing down around him. After selling 30 bikes, a request for the remaining 20 would be met with word that the fabricator had gone out of business. With no money and no additional bikes, Alden was forced to put his dream of Homestead Bicycles to bed and move on with his life. Fast forward 23 years later – one of his original Homestead bikes surfaces on a BMX website, stoking the curiosity of an online community into just what happened to Homestead Bicycles and that mysterious green frame from the 90’s. Encouraged by the newfound interest in the brand, an older Alden sets out on a path of discovery to find the people that were impacted by his unique bikes, and to track down the fabricator who’d let him down so many years before. 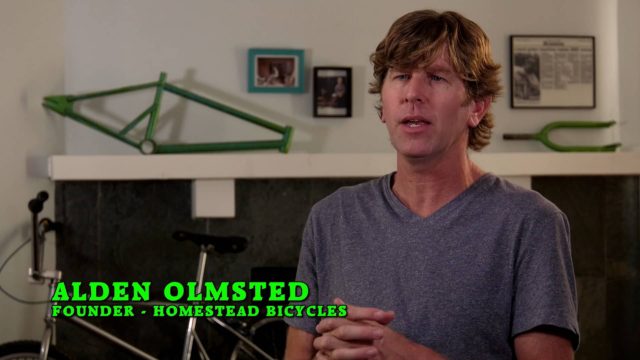 Click to watch 30 Bikes: The Story of Homestead Bicycles