The tenth annual BSX is now done and dusted. From an organiser point of view it’s an event that theoretically never should have run.  The whole BSX concept came together over ten years ago while talking over dinner with Craig from Dirt Designs about my plans for a backyard track. The idea of a one on one race was bounced around, the discussion started to get serious and we realised that it had the potential to be a nice little fundraiser. Craig’s daughter had just been to the Royal Children’s Hospital where they looked after her very well, and let’s face it BMX isn’t the safest sport around. It’s put it’s fair share of kids in hospital with a variety of injuries. So the RCH would be the perfect recipient for any funds we’d raise. It was just an idea, an event created by riders for riders, at first I had no idea just how well supported the event would be. There were many big weekends of digging, creating a track that would be able to cater for the style of riding. There were many emails and phone calls to get industry support, but the concept seemed to go down well with everyone we discussed it with.

I’ll be honest, I thought the event would eventually lose it’s appeal and fade away. But each year, year after year, the riders came back the industry support was always there, it was quite humbling that in many cases businesses and individuals would seek us out to get involved. Even celebrities like Aussie rock legend Russell Morris (famous for the song the Real Thing amongst others), Aussie cycling legend Cadel Evans and The OM of BMX Scot Breithaupt got on board throughout the history of the event.

The BSX has become somewhat of a runaway train. Each year I think it’s the last but each year it goes ahead, the track continues to evolve as does the event itself.

As per usual the Kinglake weather was proving to be unpredictable, regulars to the event would have you believe it’s the nature of the event. Anything can happen and it usually does. The Wednesday prior to the event was a real test, the long range forecast looked shocking, there was rain predicted for the next week and in biblical proportions. The famous Dirt Fairies hit the hill and covered the track, completely, with plastic. It wasn’t going to keep the track completely dry but it was going to give it a fighting chance. Friday came and rampaging Ronnie Guyers was in town to weave his magic on the track, giving it some final touches before the big day, but the rain kept things under wraps for most of the day. Fortunately things started to turn around and the weather looked a lot better than first predicted. This gave us plenty of time to get the track and surrounds ready for the big day.

On the big day, the sun was out (much to my surprise), the track was in great condition and the punters came up the hill in droves, a whole lot of worry over nothing. The practice session for 12 & Under class kicked off the day, it was the first time we had a class for the grommets since the event was conceived and it was well supported.

Then on to the practice for the Open Men, Open Women, and 30 & Over Open Wheel. There were some big hitters at the event. Last years finalists Wade and Bodi Turner were back for more sibling rivalry, but this time around they brought some friends including USA’s Nick Koehler and former Aussie champ Corey Frieswyk. Josh Callan, traveling French twins Julien and Simon Lukie, were joined by young guns Max Cairns, Hayden Fletcher, Joey Graham, Matt White, Shane Rosa, Josh McLean and a bus load of others.

BMX Victoria have been massive supporters of the event supplying transponders and volunteers to make the event run smoothly, we can’t thank them enough for their generosity, especially Steve, Nathan and Lyndon who were already very busy with the 6 races of the Track Attack series. BSX is a fun event but sometimes it’s very difficult to decide a winner with such tight finishes, making the transponders not just handy but essential. 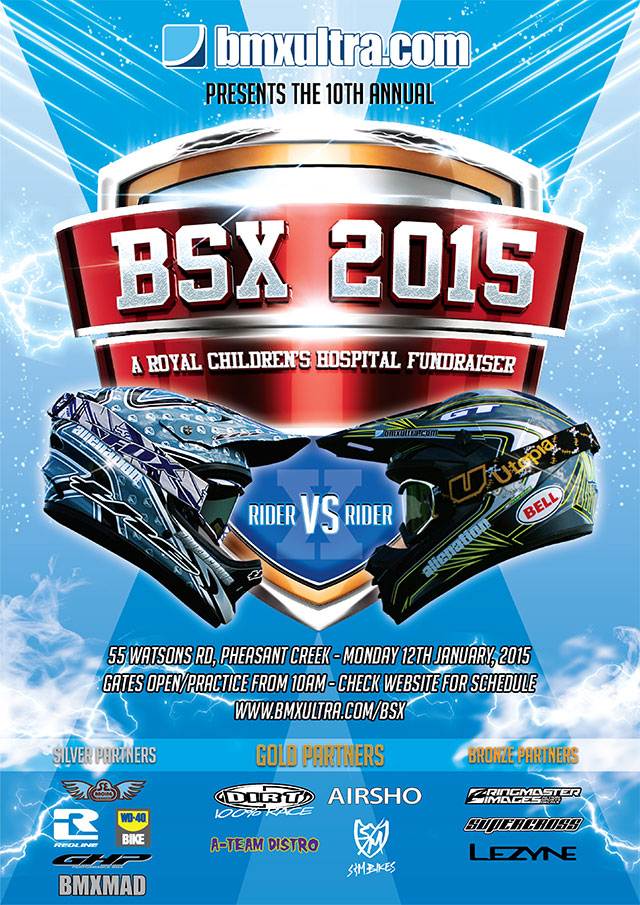 BSX2015 is presented by BSX Inc/bmxultra.com & proudly supported by

BSX (Bicycle Supercross) is one-on-one sprint trails style BMX racing on a backyard track built specifically to test a rider’s skills. The short straights, lofty jumps and tight corners are intense under race conditions, offering a fun and entertaining event for competitors and spectators alike. The event provides a unique experience for the local Victorian riders, as well as the interstate and international visitors during an off day of the annual BMX Victoria Track Attack series.

The primary goal BSX is to raise money for the Royal Children’s Hospital Foundation but there’s so much more to the event. It creates an atmosphere that words just can’t describe. Since the very first event in 2006, BSX has raised over $36,000 helping to providing the hospital with much-needed equipment.

About the Royal Children’s Hospital

The Royal Children’s Hospital is the major specialist paediatric hospital in Victoria and provides a full range of clinical services and health promotion and prevention programs for infants through to adolescents. Each year the Royal Children’s Hospital treats tens of thousands of children through our Emergency Department, inpatient admissions and outpatient visits. The Royal Children’s Hospital Foundation plays a vital role in providing additional funding to support important research projects and purchase state of the art medical equipment to ensure that every child receives the very best treatment now and into the future.