BikeNZ press release
Australian Caroline Buchanan put the demons of the London Olympics behind her when she won the Elite Women’s title at the UCI BMX World Championships inside the Vector Arena.

“I had first lane choice at London,” said Buchanan “I took lane 3 and blew it. I made sure I didn’t make the same mistake again and went for lane one this time around.”

She got the holeshot and cut off Olympic champion Mariana Pajon in the first straight, taking the Colombian out of contention. 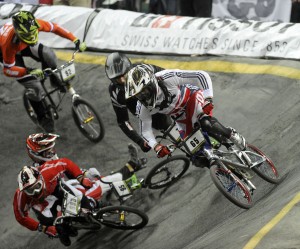 “When it comes to finals you’ve got to release the mongrel and get aggressive. I just wanted to get out front and stay out of trouble,” said Buchanan.

Once the dust settled fellow Australian Lauren Reynolds was second and Manon Valentino of France was third.

Auckland was the first international BMX event Buchanan has done since the Olympics. “I put a lot of pressure on myself to succeed.” And it’s not over yet. Buchanan will be contesting the World Downhill Mountain bike and Mountain bike 4 Cross championships – a title she has won twice before – over the next two months.

There was no fairy tale ending for home town darling Sarah Walker who was already nursing a broken arm in a special protective splint.

She came down in practice before racing and in an effort to protect the arm she landed heavily on her shoulder stretching the AC joint. She rolled around at the back of the three qualifying motos to end her meeting.

Englishman Liam Phillips made the most of his opportunities after most of the sport’s heavy hitters had eliminated one another in a quarter final crash fest.

Kiwi Marc Willers was the only World Champion finalist from last year to make it through the eights, quarters and semi-finals to the main event.

Phillips led from the start and once Willers decided not to attempt a “death or glory” passing move in the second corner, the Englishman was home and hosed.

After the Olympics, Phillips said he decided to target the World Championships. He didn’t race on the USA pro circuit but stayed home and trained on and indoor track at Manchester similar to the one at Vector Arena.

“We knew it would be tight and planned for this,” said Phillips. “I knew my form was quite good when I won the Manchester World Cup, but then I made mistakes at the next two World Cups in Europe.”

“I just wanted to keep the mistakes to a minimum and I managed that.”

Felicia Stancil of the United States added to her impressive growing list of World titles when she took out the Junior Women’s crown – her 14th in succession as she has come through the age grades. It was her second success in 24 hours after winning the time trial on Saturday.

America was also successful in the junior men with Sean Gaian, claiming the title from Argentina’s Gonzalo Molina and Jeremy Rencurel of France.