A “perfect lap” propelled Connor Fields from the USA to victory in the elite men’s time trial at the UCI BMX World Championships in Auckland, New Zealand tonight.

Fields was the fastest qualifier and then had to watch as several of his rivals improved their times in the top 16 run-off to decide the medals.

As the last rider to hit the 300 metres track he did not disappoint improving his first time by 0.261 seconds to stop the clocks at 22.598 seconds.

“The lap was great. I just tried to be as precise as I could. I don’t think I made any mistakes. I certainly can’t remember any,” said Fields, who successfully defended the title he first won last year.

Fields looked smooth as he cleared jumps on all four straights and was carrying lot of speed as he crashed into the large foam rubber barriers after the finish line – a necessity in the tight confines of the stadium.

“This is pretty exciting and means more to me than last year. It was certainly a lot harder.”

French riders completed the podium with Joris Daudet second and Sylvain Andre third for the second year in a row.

Fields is now hoping to carry his form into tomorrow’s racing.

“My head wasn’t in it last year after winning the time trial, but I think I’ve learned a lot in the last 12 months and can re-focus better.”

Pukekohe’s Trent Woodcock was the top New Zealander, finishing 15th in the runoff, while the other five Kiwi men qualified in the top half of the field for the three qualifying motos.

Olympic champion Mariana Pajon of Columbia took out the elite women’s title by a 0.3 seconds from American Alise Post.

“It’s a title I wanted to chase,” said Pajon, who finished third in the event two years ago. “I’m so happy; I had a great first straight.”

While the tight, technical track has created differing opinions, Pajon is not concerned.

“It’s different from the big outdoor tracks, but it’s the same for everybody and the fastest person still wins. I love this track.”

A superstar back home where she has 1.2 million Facebook friends, Pajon said the crowd support has been great.

Her sentiments were echoed by Sarah Walker who qualified second fastest despite her still healing broken arm. “The crowd was unbelievable.” The Olympic silver medallist was given an almost deafening reception by the home crowd.

“I’ve never had to deal with that before,” said Walker. “It was hard to focus on what I had to do when I was up on the start gate. But the home crowd definitely does help.”

In the run-offs she put in another consistent run to finish sixth.

“I’ll do the best I can tomorrow. I think I’ve got the track speed, but the gate starts and getting to the first corner is all important.”

Frenchman Romain Mathieu successfully defended his Junior Men’s title after qualifying second fastest. The best of the Kiwis was Cody Hobbs of Te Awamutu in 17th.

New Plymouth’s Hannah Sarten was second fastest in the Junior Women’s qualification and despite improving her time in the run-off finished fourth. 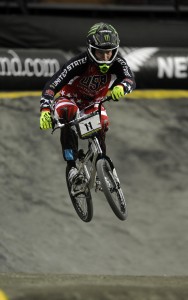 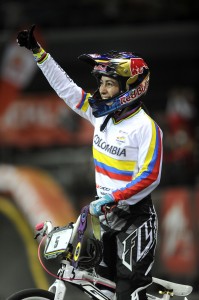 Mariana Pajon (COL) thanks the crowd after her win in the final of the elite womens time trial at the UCI BMX World Championships at Vector Arena, Auckland, Saturday July 27, 2013. (Picture Ross Land)