I haven’t had the chance to look at a lot of Alienation products but my first glimpse was their Ratchet hand grips, last year, and they simply blew me away. They were some of the most comfortable grips I have ever used and quite durable too. It’s obvious those guys over at Alienation put a lot of thought into their products. In today’s market it’s not enough to have “me too” products, you have to go that one step further to push the boundaries and Alienation do just that. Needless to say I was excited by the idea of reviewing the Alienation Bullitt hubs. 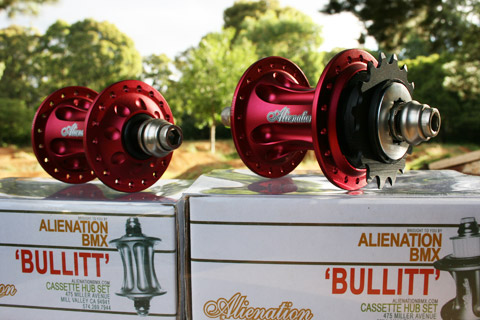 I have had some pretty sweet hubs on my bikes over the years, including more recently Profile and Supercross BMX, but it’s Alienation’s different approach to the mechanics behind the driver that sets these hubs apart. It’s a real advantage to be the “new kid on the block” and be able to learn from what’s already out there.

Bullitt cassette hubs have a very unique look compared to modern day hubs but are reminiscent of Son Lite Turbo hubs of the 80’s or TNT’s Revolver hubs from the late 80’s and early 90’s. Of course the Bullitt puts a whole new spin on things being a cassette hub with a difference. The only real downfall here is they are more difficult to clean, but well worth it. On close inspection I noticed that there was a slightly larger rib with an alienation logo on it. So I did a little hunting thinking that it might have a function to act as a counter weight for a valve or something along those lines. But apparently it’s just there by design to give enough space for a good sized decal, a nice touch. 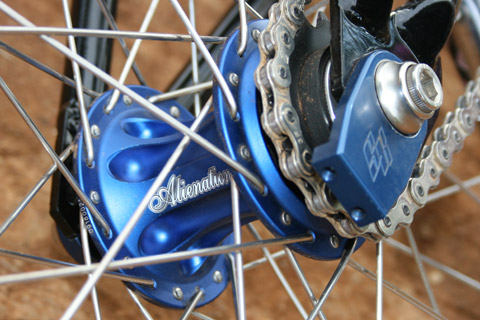 It’s the engagement system that sets the cassette mechanism apart from others. Most hubs engage at 10 degrees, King is 6, Ringle is 10 and Alienation are 12 which is the mountain bike standard set by Shimano.

There are many advantages over other hubs

Alienation’s design sacrifices engagement for an effortless hub with minimal drag. The theory behind it all is based on the fact that tracks are a lot more technical now than they ever have been. You might have a sprint down the first straight on a track but for the rest of the track you need to pump, manual or jump your way through with little opportunity for pedaling. Decreasing the drag and allowing the hubs to spin more freely provides a massive advantage over a couple of hundred meters. 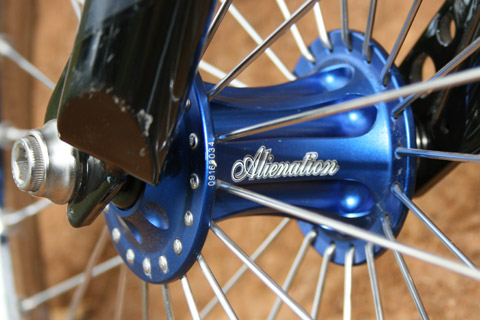 The hubs come in a limited colour range, but I’ve got to tell you the colours are quite vivid. The red and blue really draw your attention, while the black is a lot more subtle but is also a great colour choice.

How do they compare to other hubs weight wise? They are slightly heavier than a Profile Mini race hub which, with Ti bolts is 224g for the front hub and 374g rear hub (with Ti driver and 16 cog). The only difference is around 80g for the set. If you want lighter the Alienation have you covered. The Alienation Royal has the same mechanics but is much lighter again at 200g for the front hub and 310g (with cog) for the rear. I think the look of the Bullitt and stiffness is worth the small weight difference. Oh and just in case you were wondering the 8mm allen key bolts do a great job of locking the hubs into place. 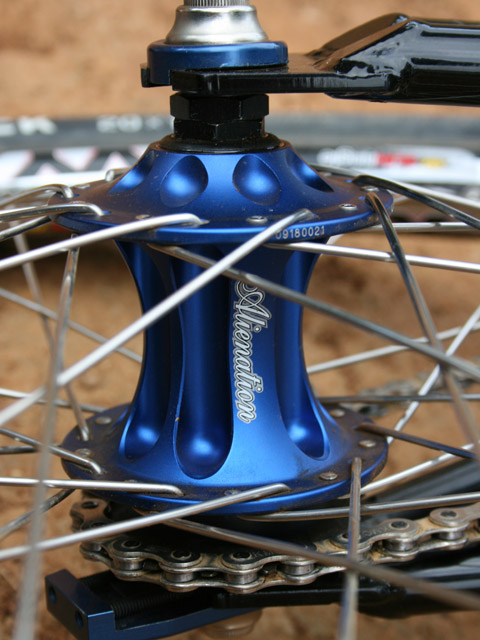 In an ideal world all hubs would be free spinning and spin forever, but there are so many contributing factors that make this nearly impossible in the real world. The Alienation Bullitt hubs are the closest thing to the ideal world that I have ever seen. These hubs really do spin well.