A stop watch is the most fundamental training device for any race sport, it’s a staple in any coaches little bag of tricks. Being able to get instant feedback from a lap (or laps) is important for coach and competitor.

It could be argued that the inclusion of transponders for BMX racing is valuable information for rider and coach. Although when it comes to racing BMX you could put in a single fast lap and it could be the fastest of the day but it doesn’t mean you will make the final. People generally use transponder information to compare their times with others, but it’s information that’s rarely available for training sessions where timing really makes sense.

I was once given a watch, many years ago, that I thought made a good stop watch for training. You slapped it and it gave a 10 second count down, when you wanted to stop it you slapped it again. It was handy, since I didn’t need someone with me to operate the stop watch. The problem with it though is it regularly registered a harder landing on a jump and stopped the timer. It was the last time I’d used a timing device for training. 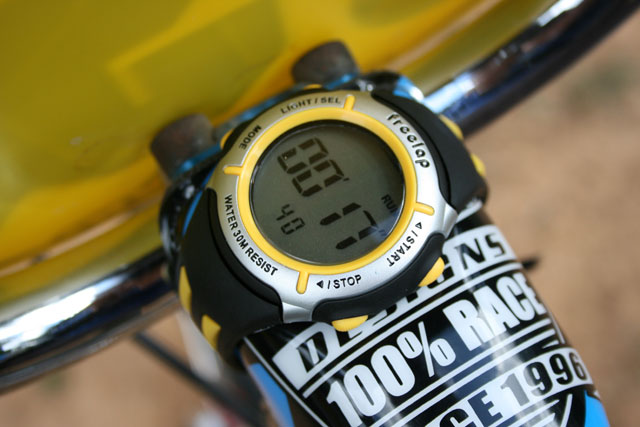 I had noticed recently the emergence of Freelap Timing Systems on Facebook. It seems that a number of Pro BMX racers and teams in the United States use them for training. I’d be the first to admit I don’t care for timing my races, or training much at all. I’m far more interest in enjoying my time on the bike. I was however interested in a timing system for my backyard track. Each time we made track changes people would ask how long it would take to get around. And we needed a way to measure both lanes to see if they were similar in time. Sure, we could use a stop watch and try to get times, but we all know the accuracy is dependent on the operator.

I saw a video of Tony Hoffman showing how he and Austin Hyatt uses it to record sprint sessions  (http://www.youtube.com/watch?v=xM9BGizVOWk). It looked pretty straight forward. Although Tony and Austin appeared to adjust the location of the transmitters to get extremely accurate readings, it’s not something you have to do unless comparing times from one session to the next is vital.

There is also a pump track kit that sells in Australia for $365. It consists of

Although if you buy the BMX Kit you have more flexibility and can use it for both applications.

Setting up the Freelap Timing System

The BMX Kit is simple. Whether you are just timing sprints, or timing yourself on the track, it’s as simple as placing the transmitters horizontally on the ground in your preferred start and stop position and putting the watch on your bike. The best place for the watch is wrapped around your stem, it’s secure and easy to access.

By default the watch is in time mode, a simple press of the mode button changes to stop watch mode and it’s ready to start recording.

When you ride past the second transmitter it stops the timer.

You could buy additional transmitters and set them up at multiple points around the track or like in the Tony Hoffman video and place them at points of interest. You can simply adjust where the transmitters are on a track for example and segment the sections of the track you want to improve your speed on. Let’s say you are having trouble getting through a third straight rhythm. You could set up your first transmitter at the start of the straight and the other at the end and try different things through the straight until you work out the quickest way for you. 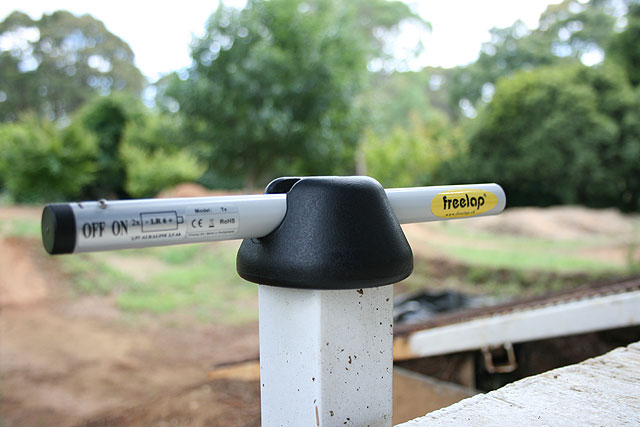 I like the fact the timing system is hands free, completely automatic, it’s very simple to use and you get instant feedback from it. I really like the freedom, the watch can be easily switched between bikes and riders. Perfect for that competitive family or bunch of friends.

The freelap watch is far more advanced than the simple use we had for it. You can also time laps, perfect for pump tracks. You can store a large number of lap times and upload them to your computer if you like.

For a device that has so many applications and potential uses, the Freelap Timing System makes for a great BMX timing system or training tool.

The only problem I had with the system is when I forgot to switch one of the transmitters off and the battery ran flat. They take AA sized batteries so it wasn’t a problem getting it up and running again.

Freelap for your track

While Freelap is perfect for personal use there are add-ons that your club could purchase to make your Freelap watch more useful during training sessions. Rather than us try to tell you about something we haven’t used we asked Leon from Freelap Australia to give us the run down.

“There is a full track set up that can be hooked up to Pro-Gate, Cartessa or Smart Start starting gate. All watches in the field are triggered once the gate is released.

A full track can be set up from a start finish for under $1,000. Any club member can then use a stopwatch to get accurate consistent timing anytime they ride. Additional splits can be added if required.

The Freelap BMX Gate is used to start all the Freelap watches in a BMX starting gate. Using the supplied connector, the BMX gate is connected to a Cartessa,  Pro-Gate or Smart Start system. The supplied copper wire is looped underneath the starting area. When the signal is sent from the Cartessa/Pro-Gate to drop the gate, a magnetic pulse simultaneously starts all the watches. Power for the BMX Gate is supplied by the Cartessa/Pro-Gate; no batteries or additional power is required.

There is also a cheaper version of the full track set up that starts the watches as riders leave the transmission field, This can set up a track for around $700 and is permanently left on and buried under the surface.” 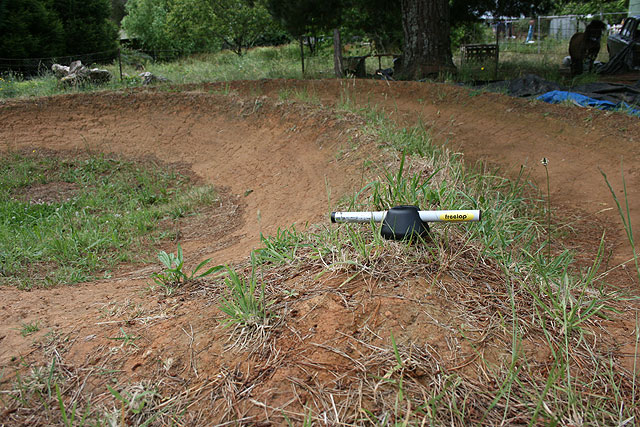 So what’s the verdict?

I’m a gamer and have been having trouble staying away from BMX Mad Skills and various
PS3 games, which would take up any time I could spare. That was until I started to use the Freelap system to push myself to beat fastest times on the backyard track. I’m not playing so many games at the moment, but spending more time on my bike and still getting that same buzz from knocking 1/100th of a second off my time.

My favourite toy will always be my bike, the Freelap Timing System ain’t bad either and is starting to become a regular at my riding sessions.

For further information check out the Freelap Australia website at www.freelap.com.au/mountain-bike-bmx