Europe’s biggest BMX manufacturer, One Bicycles, have extended their product range significantly for 2004. They are taking on the big guns and pushing their way into a hard fought crank market. 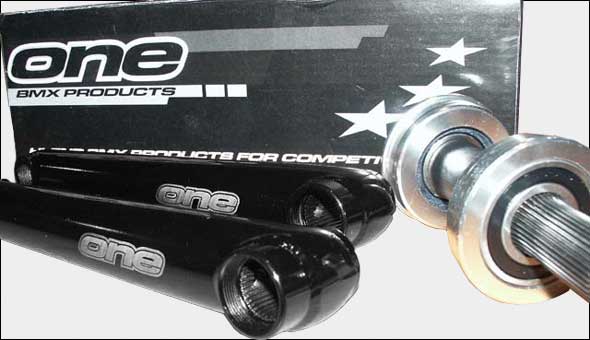 One Bicycles won’t be considered a serious contender until they increase their range, currently the cranks are only available only in 180mm, with a colour choice black or chrome, and the option for Euro or American bottom bracket.

We chose up-and-coming A Pro Joseph Bujak to test the One Bicycles cranks for various reasons. He’s a strong new school rider who loves to jump everything in sight, but most importantly he’s an unsponsored A Pro who has to pick and choose the products he uses carefully. As a side note, during the testing period Joseph used the cranks at the Australian championships and finished second in the 18 mens expert class.

The first impressions
Pulling the cranks from the box they looked very familiar, the arms had a nice gloss black finish with the One bicycles logo etched on outside. Weight wise they are a nice and light crank set that look solid due to the slightly ovalised tubing used for the crank arms.

Easy to install
It takes about 30 minutes to take out the old crank’s then put new ones in, if you aren’t confident in doing it take them to your local bike shop. I found the only work required is to adjust the spacer length depending on bottom bracket width. As far as tool go I only needed a 6 mm and 8 mm allen keys, crank puller/pusher and a hammer to tap out the old cups and tap in the new ones. Just to make sure you get it right, the 48 spline 19mm cromo spindle has clearly labelled sides left/right as do crank arms. Hinting the crankset
is single side drive only.

The test
I installed the cranks shortly after the Track Attack series in January. That’s about 3 months of testing. As soon as I started riding with them I was immediately able to feel a difference, the cranks were solid and stiff, there was no flex in the crank arms or spindle what so ever. On the gate they felt great I was able to get a strong, direct drive out forward. The cranks also spun extremely well and easily (very smooth). The big test is how they work 3 months later and here’s how they held up.  Apart from being a little scratched from a few falls the powder coated crank arms are still black and glossy, ‘ONE’ logo remains as obvious as ever (no doubt about what brand these cranks are), the bearings are still running smoothly, most importantly the cranks and spidle are still straight after casing numerous jumps, multiple times.

To find out more about One Bicycles and their product range check out www.onebicycles.com.