We have had the opportunity to review many Pazzaz products in the past and no matter how hard we try we just cant seem to fault anything in their range. To the every day rider quality products may not be the only requirement, there is also the $$$ (dollar) factor.  What’s the use of making a product that only a select few people can afford? Like all Pazzaz products the MX418 handlebars are made at a high quality with the budget conscious in mind. 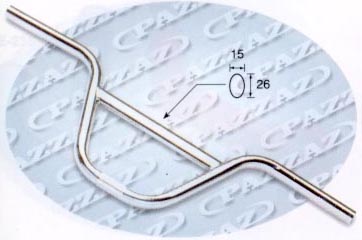 The MX418 Handlebars are marketed as a dirt jumping handle bar, actually in the 2002 Pazzaz catalog they say that they are “THE dirt jumping bar”. The MX418, also known as the “Dirt Pro”, are made from 4130 cromoly, they are available in 3 finishes; chrome, black and clear. The dimensions aren’t too bad, they are 690mm wide, 180 mm high and have a 9 degree sweep, and for those who care about weight, how does 880 grams sound?

Oval cross bar is a feature of the MX418s, but isn’t new to BMX. I had a set of JMC Darryl Young/Black Shadow nearly…a long time ago. It probably is a little bit of a gimmic, I can’t see it adding to strength of the bars or the stiffness for that matter, but it also doesn’t make them any weaker. One bonus is, if you don’t run pads while you are riding it’s a good place for stickers.

Another feature is the gnarled area to help the stem really grab on to the bars, there is nothing worse than a bar that slips because the manufacturer just didn’t add any gnarling, trust me it makes a world of difference.

For many years I had used Powerlite handlebars with the “powerbend” so it took a little bit of time to get used to the straight bars again but it was time well invested. We put these bars through the famous bmxultra.com LCT (Life Cycle Test) and they fared quite well. Installation was the usual rig-moral of changing the grips and brake lever and then the stem, everything fit without any problems and naturally we didn’t experience any bar slip during testing. 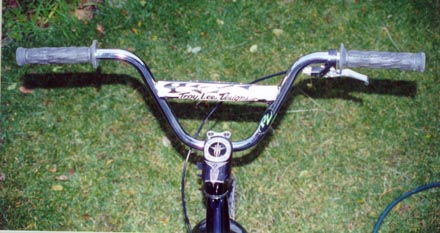 The 9 degree bend in the bars is a little less than the standard 12 degrees, this means that the bars don’t curve back quite as far as the typical handlebar. But it makes a big difference, for starters you feel like you have a little bit more knee clearance, actually it makes it feel like you have moved the bars forward if you change over from a 12 degree bend. It also puts your hands in a more natural position when gripping the bars for gate starts, accelerating out of corners and jumping.

Even after months of everyday riding, racing, general abuse and several crashes we found the MX418s as straight as the first day we got them, they are now my personal handlebar of choice. During testing we used both the black painted and the chrome version and the paint isn’t anywhere near as durable as the chrome, if you had to choose I’d go for the chrome because it’s a great finish that will outlast the handlebars.

You can get more information about the Pazzaz MX418 handlebars and the rest of the Pazzaz range at www.pazzaz.com