Sun Ringle have been the leader in the BMX rims and wheels market for a long time, their number one seller, until now, would have to be the Rhyno lite rim. It’s been the rim of choice for so many riders for so long, I was surprised to see a new rim come out of Sun. Actually when the Hayes Bicycle group bought Sun Ringle a few years back I assumed that Sun would just fade away, once again I have been proven wrong. 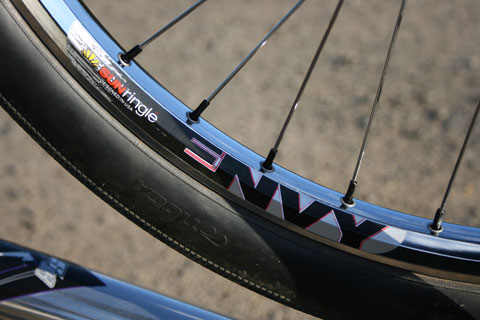 Sun Ringle came out with the ENVY rims in 2008, just in time for the Olympic debut of BMX racing. Many of the Olympians were running them for the most important BMX race in history. Sun Ringle claim “the Envy rims are the lightest, strongest, fastest 1.75 BMX race rims ever offered by SUN Ringle”. This may be true, but when I went digging for weights on the web there were conflicting weights and Sun Ringle’s own website didn’t have any tech specs at all on the rim, actually they didn’t even have the rim listed amongst their BMX rims at all. From what I can make out the weight savings is around 100 grams per rim, that’s a 20% weight savings in the rim alone, which is a great savings no matter how you look at it.

The biggest differences between the Rhyno Lite rim, aside from the weight, is that the ENVY has the single hollow chamber, which the the main reason for the weight savings, and the fact that there is a front and rear specific rim. Since you only need a braking surface on the rear rim it makes a whole lot of sense.

Don’t be mistaken, the ENVY is a race rim, it’s built to be light weight and strong, but if you are going to be heavy on your rims you might want to consider something that might handle the abuse and give away the weight savings. That’s not to say that the rims didn’t hold up to my 105kg, I’m happy to say they have and they have held up very well. All I’m saying is like any other race specific product just don’t expect it to be bomb proof, the US Military aren’t building hummers out of ENVY rims.

So what do I think of the ENVY rims? I have been using them for a few months now and still can’t fault them, I can’t flat spot them. I’m glad to say the only place I have had any problems with my wheels at all is with the spokes stretching and coming loose, a quick tighten up with the spoke key and I’m off again.

One problem people have with some rims is getting tires on and off, I had no problems with my handy plastic tyre levers getting my Tioga PowerBlocks and Supercross Blue Streaks on and off.

(This is the most complete weight chart I could find, it may not be accurate.)