Over 25 years ago Tioga turned the BMX world on it’s head with the Tioga Comp III tire. It was the tire to use for many years. A tire that’s legendary enough for the USA team to pay homage to it in their 2008 Olympic Team uniform (you can see the tread pattern in a checkered pattern thoughout the jersey and pants). The Comp III still available today. 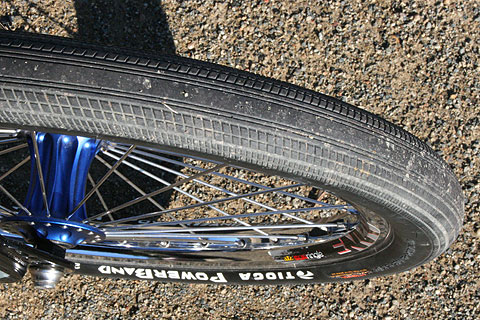 In 2008 Tioga once again made the BMX industry rethink the way tires should function with the PowerBlock tire. Not only should a BMX tire provide grip but distribute more power to the ground with minimal rolling resistance.

By the time the PowerBlock hit the market it was race proven. In 2008 Donny Robinson finished third at the Olympic games in China with a PowerBlock prototype tire on his bike.

By mid way through 2009 the PowerBlock was dominating the tire market. Donny, continued on his winning ways and went on to win the World Championships in Adelaide in 2009 with PowerBlock tires. 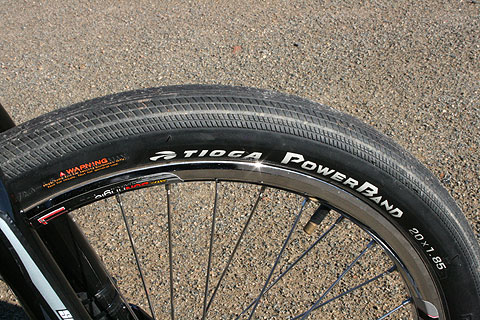 It was at the 2009 World Championships where we saw the first mould of a PowerBand tyre. A front specific version of the popular PowerBlock. The PowerBands are now in production but don’t look a great deal different to the PowerBlock. You will notice that the “Band” down the middle of the tyre is solid.

The bmxultra.com team were given a couple of prototype PowerBand tires to check them out. After running a 2.1 tire up front for a long time now it was weird to look down on the gate at a narrow 20 x 1.85 tire. So I asked Tioga if they are going to be making any other sizes. This was my answer:

“You are a big guy so the 1.85″ may feel a bit smaller than what you are
used to. The PowerBand as a front specific tire is designed to emphasize
two characteristics – stability and lowest possible rolling resistance.

To increase stability, the center portion of PowerBand tread is 16mm wide,
compared to 12.5mm of the 1.95″ PowerBlock (conversely, the narrower
center block of the PowerBlock is designed for better mobility). So by
applying a wider center strip we are able to save weight by using a
lighter, narrower casing but still offer better surface contact compared
to PowerBlock 1.95″ – which up front translates to stability. So at the
moment, we feel 1.85″ is the optimal size for the PowerBand tread design.”

This put my mind at rest and I pulled a win in my first race on them. After a couple of days of using the tyre I started to forget that the tire was smaller, because it provided just as much grip as the bigger tire that I was used to and just like Tioga said with less weight. By the time the Australian Championships came around I had been injured for some time and lacked the horses I was used to and had to rely heavily on cornering to make up time. While carving the tar corners not once did I have to worry about traction, there was plenty and I think I could have got away with pushing them even harder.

The PowerBand tire is only available in one size 20 x 1.85 but in two options (details below)

The PowerBand is an awesome tire, but be careful using it in wet and slippery conditions. Just like the PowerBlock it’s more suited to dry weather well maintained tracks. The Tioga Power series tires will be just as important to BMX racing as the Comp III was.