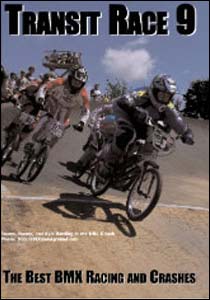 You have got to love the Transit Race series of DVDs, as a BMX racing junkie I always feel compelled to get a hold of the latest installment and check it out. Sure the content is a little dated by the time you get to it, the latest race on it would be the NBL grand nationals from September 2006, but for the people not lucky enough to get to the prestigous races on the US circuit that the Transit crew cover it’s all we have. Usually we get to see some tiny videos on the web and magazine coverage, but the videos are so small you aren’t able to get the whole picturee, and although I love reading the race reports and checking out the photos in the mags, there is only so much the magazines can capture in a couple of pages. Nothing is as exciting or amazing as watching as riders going at it with a national crown on the line. They just keep pushing the envelope. For me any Transit Race DVD is entertainment in it’s purest form, better than any show you will see on TV.

As a proud Australian, I love playing spot the Aussie on the Transit DVDs. But you will have to wait until the end of this DVD to see Glenn Codega from Phirebird got from 4th in the second last straight to take the A Pro win at the NBL Grands. Glenn’s Phirebird brother, Jamie Gray, was in the AA Pro semi, but pulled a tough one and didn’t make it through, he was also in the Elite Men’s final from the World Championships at Brazil crashing out in the first straight. Michael Robinson is also in the AA Pro semi and final at the Grands.

There is no interview for the first time in Transit history, but it’s made up for after the #1 NBL rider is decided at the Grands. The Transit crew talk to the top 3 riders Donny Robinson, Kyle Bennett and Randy Stumpfhauser.

The maditory crash section is always fun to watch. I am glad to see all the racing is at the start of the DVD and the extras is all at the end. It’s interesting watching Harley and Kelly Kelly squeeze seven guys into a car and tie about 9 bikes to the roof. And those crazy kids jumping their bikes into the bean bags, I saw that when I was at the Grands and I knew the Transit crew wouldn’t be too far away, so I made sure I was standing behind the camera man.

If you love Transit Race DVDs go and buy Transit Race 9, you won’t be dissapointed, if you have never seen a TR DVD it’s a great place to start..

Rating 20/20:
(I have had to change the rating system for DVD’s I hope
this works for you)