Finally the UCI Supercross series is available on DVD. Now that’s something to get excited about. You may have seen some, or maybe even all of these presentations, as they have aired across the world. You may have even captured them all on video tapes, well it’s time to upgrade to get the complete set on the friendly DVD format. Any serious BMXer would already have started to build a good collection of BMX racing DVD’s thanks to the guys at Transit, but it wouldn’t be complete without the UCI Supercross DVD’s.

The DVD set, starts from the first UCI Supercross race back in 2003, document not just each event but the evolution of the UCI Supercross and how the sport will be presented to the public in it’s debut appearance at the 2008 Olympic games in Beijing. It was obvious from the minute that the UCI took on the X-Games style downhill racing format that it would work for TV but not so great for attending spectators. You couldn’t see the full track from any one position and the terrain wasn’t so friendly. The UCI came to a compromise in 2005 building tracks that looked a little more like everyday race track, except this time were built for the sports elite in mind only, with huge jumps and monster starting hills to get the riders up to speed right from the get-go. 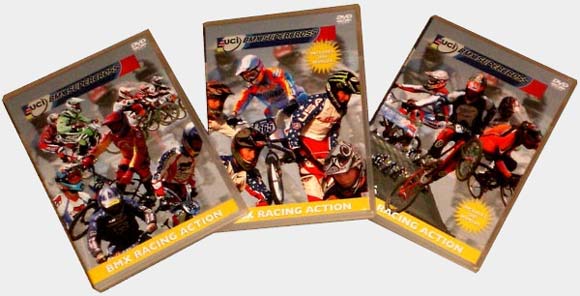 The first DVD in the series includes fantastic footage from back in the downhill days at Woodward PA in 2003 and Woodward West CA 2004. This DVD shows the emergence of today’s stars like Mike Day and Michael Prokop along side the likes of downhill specialist Robbie Miranda and Brandon Meadows. Throw in BMX racing superstars like Randy Stumpfhauser, Robert de Wilde, John Purse, Thomas Allier and a whole bunch of BMX racers with big big, football sized, Kahunas. Downhill BMX racing may be a thing of the past, and may never happen again, this one DVD contains some of downhill BMX’s highs and lows, from jumping 40 foot doubles to crashing at speeds of 40 miles/hour.

DVD 2 includes the UCI Supercross rounds from the UCI head quarters in Aigle Switzerland and San Jose CA and as a bonus, the 2005 World BMX championships from Paris. The San Jose track becomes the first glimpse of the style of track we would actually see at the Olympics. Complete with the biggest starting hill that BMX has ever seen, and a monster berm jump that challenges riders, both mentally and physically. The tight corners and technical jumps brought even the world’s best racers unstuck.

DVD 3 Includes the biggest UCI Supercross round to date, at San Jose CA, then on to Frejus, France and the UCI world championships at Sao Paolo, Brazil.

There is a separate show for each event, each running at around 25 minutes, and usually include a discussion with Johan Lindstrom from the UCI, Tom Ritzenthaler who’s the track designer and builder, as well as interviews with some of the riders.

You can buy your copies of the UCI Supercross DVD’s direct from BMX Mania via www.bmxmania.com/ucidvds.htm

Now, only if ESPN would release the downhill BMX footage from the X-Games on DVD and I will be set for winter.