When I started racing BMX in the early 80’s freewheels and threaded hubs was the norm. Shimano and Suntour seemed to have the freewheel market wrapped up. It was a long reign for the freewheel. Around 20 years later the cassette hub started to dominate. It appeared as if freewheels were gone, like all the other dinosaurs of BMX, open face helmets, V-bars, and platform pedals. Cassette-mania even went so far that new complete bikes had to be sold with cassette hubs or people wouldn’t give them a look in and it didn’t even matter if it was a cheap cassette either, it just had to be a cassette. 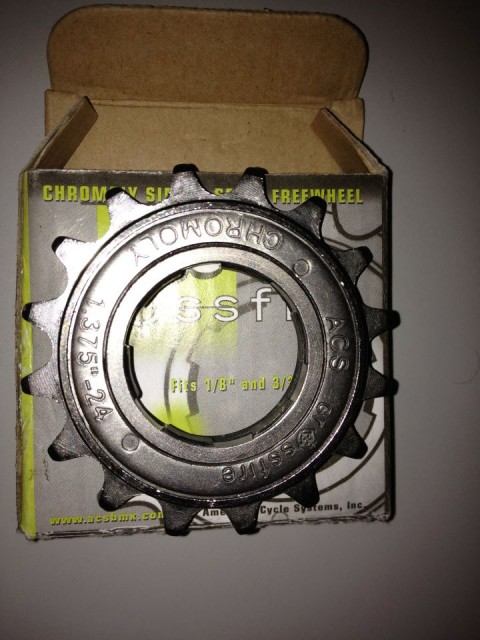 There were a few people left that put their trust in the Freewheel, even modern day champions like Marc Willers uses freewheels exclusively and Sam Willoughby is also known to have used freewheels in recent times. Box Components are one of BMX racings newest manufacturers and they are making a 20mm threaded hub which flies the flag very high for the freewheel.

What is it about a freewheel and threaded hub set up that’s so appealing?

There have been some notoriously bad freewheels over the years. Dicta is a brand to avoid, but there have been some reliable freewheels too. Shimano is still available today, however supply is often limited, and I’m pretty sure you will be lucky to find anything other than a 16T. White Industries is a preferred option by many freewheel connoisseurs, it’s a lot more expensive than most other freewheels, but it’s also a high quality, serviceable product. And then there’s ACS.

ACS replaced the Claw with the Crossfire a few years back and have been reaping the rewards of a cheaper, and more reliable freewheel. But when the BMX world started to move towards “instant engagement” cassettes ACS stepped it up with their ACS Crossfire Pro Freewheel.

It was about a year ago when I first saw a prototype of the Pro freewheel, and it would have been nice to spend some time using it then but it had to travel the country with a bunch of other products that ECI (distributors of ACS in Australia) were showing off.

“Our best freewheels for uncompromising performance. CNC wire pawls and steps for the ultimate precision. Each pawl engages 2 steps for maximum grip. 60 steps for engagement every 6 degrees. Nickel-plated sprocket ring.” (From the ACSBMX.com website) 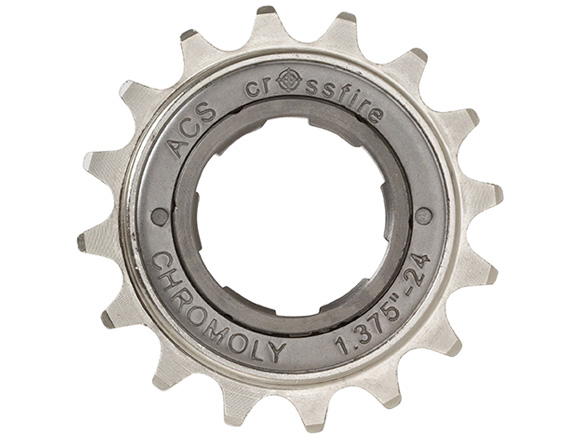 As far as the bearings go we were able to determine they are “weather-isolated bearings for long lasting performance” it also means low drag.


The ACS Crossfire Pro freewheel is manufactured from cold forged cromo and is CNC precision machined. It has twice as many engagement points than the standard ACS Crossfire Freewheel.

What I like about ACS is they have their own tool for the Crossfire freewheels, it’s a whole lot easier to get stubborn freewheels off with than the older 4-pronged Shimano tool that both Shimano and White Industries use.

I put the 16T ACS Crossfire Pro freewheel on my Sun Ringle Superstock wheel set that I’ve had since 2000 and took off for a ride. The chain ran smoothly on the freewheel and the freewheel was almost silent, which I appreciate. Since I put little value on “Instant Engagement”, the engagement wasn’t something I trying to notice, but it did engage quicker than the Alienation Royal cassette hubs that I normally use. The freewheel did inject some new life into the old wheelset, that’s for sure!

If you are looking for a good freewheel that is simple and will provide plenty of bang for buck you can’t look past the ACS Crossfire Pro.

ACS is Distributed in Australia by Elite Cycle Imports. For more information about ACS check out www.acsbmx.com