Oh yes, it’s another Alienation review, and yes, once again they blitzed it! Before you go check something else out do yourself a favour and take a couple of minutes to read this review.

There’s one thing I find I have to continually remind people and that is Alienation isn’t a freestyle company. It’s a BMX company! They specialise in rims and offer a massive selection to suit any rider of any size, any ability, any budget and any taste. There aren’t any other rim manufacturers in BMX land, that I can think, of who could come close. While Alienation specialise in rims and have very quickly become the Araya of our time (if that reference doesn’t mean anything to you all you need to know is that Araya dominated the rim market in the very early days of BMX.) they have a whole lot more to offer. They have grips, seats, posts, hubs, tires and a whole bunch of other stuff.

Anyone can claim they are an innovative company that comes up with cool ideas. It’s a claim that’s often made, it’s called marketing. Alienation seem to be the opposite, they are innovative, they do think outside the box and come up with some awesome ideas that they make a reality. Not only that, they take the time to make their products as awesome as possible before releasing it to the masses. Look at the tubeless tire system for example, that’s been 2 years in the making, but they refuse to release anything short of perfect. What I am trying to get to is they let their products do the talking for them, and so they should, their products are awesome in so many ways. The thing is it takes a whole lot longer to get the word out that way, and BMX racers just haven’t caught on with a lot of the gear yet.

As a racer of over thirty years I race for myself, and I do it my way on a bike that I personally hand picked the products for and custom built and I do it in race gear that I choose to wear. I’m particular about my bike set up and people who have been around a while all seem to be that way. When I first saw pivotal seats hit the market, I thought now that’s a freakin’ awesome idea. I remember thinking it’s a shame you can’t move your seat forwards and backwards for additional adjustment though, all you could adjust was the angle of the seat. It was a while after that I saw Alienation’s slider and knew that Alienation were on to a good thing. It’s been out a couple of years now and still appears to be less common than railed seats in the race scene. Why? I hear you asking. Well like I said earlier racers just haven’t caught on yet.

When you put a traditional railed seat and post up against a slider and pivotal post the slider option looks better no matter how hard you look. 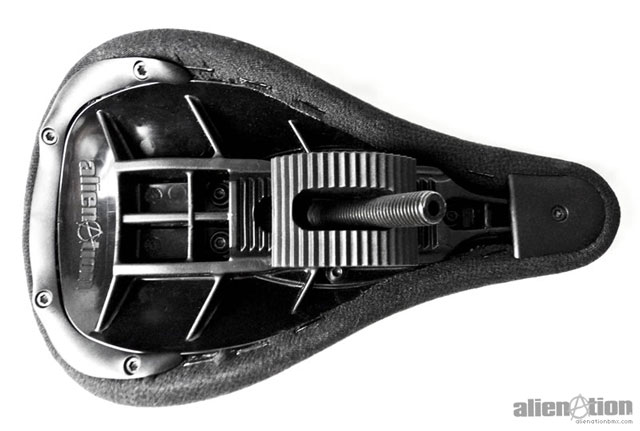 I had an Alientation MikRib slider on my bike for around nine or ten months, it’s been through the wars that’s for sure, but still looks as good as new. Even the stitching still looks new, still very white and still very much in tact. I thought I’d give the Back-n-Black seat a try to see how it’s different.

The Back-n-Black is a great seat, it uses the same slider mechanism as the MikRib but has a slightly different finish/look about it. The MikRib has a vinyl cover with pin striped stitching, the Back-n-Black is a lot more… stealthy with it’s full black kevlar cover and black stitching. The kevlar provides more grip on your race pants for people who like to control their bike that way, not so much that it sticks, just a noticeable amount more than the MikRib.

I found the Back-n-Black to be a very comfortable seat. I take my bike for longer rides for general fitness and it’s just as comfortable after riding for 15kms as it is cutting laps around a track. Sure, it’s no comfy couch, but for a light weight and yet durable seat for racing, it beats any other seat that I’ve used in the past. 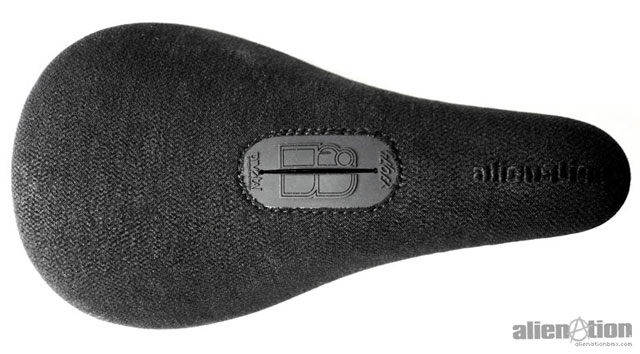