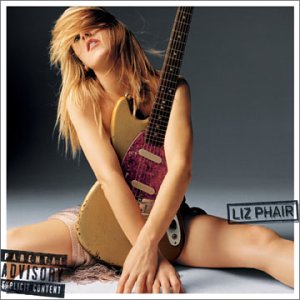 Liz Phair’s music has changed somewhat since her debut 1993 release “Exile In Guyville”. The self-titled album, her fourth, has received mixed reviews, many of her fans suggesting that she has sold out. It has a more produced pop sound to it than her previous raw lo-fi recordings of “Exile”, and her second album “Whip-smart”.

In an age where music companies are merging and artists are being dumped by the hundreds, Liz is able to continue recording with a major label. It seems that her fans have a big problem with her association to Avril Lavigne’s production team The Matrix than anything. Disappointed that they might be trying to turn Liz into an Avril for the twenty or thirty somethings.

Her music, in general, is far from radio friendly, well most of it. Sure if you just like to listen to the music and don’t get too involved in the lyrics you might find that it sounds like something you may have heard before, and it’s possible there was a track or two that did get some airplay. But the parent advisory label on front of the CD is there for a reason. Liz still likes to sing about sex and she’s quite blunt about it in her lyrics.

The songs to listen out for are Extraordinary, Why Can’t I, Rock Me, Little Digger, Favourite, Love/Hate, come to think of it they are all worth a good listen.

A bonus that comes with this album is the online EP download that is only available through this CD.

I have been listening to this album for the past week and a half and find it more and more appealing each listen. Is it a must buy? If you are a Liz fan it could be an experience that would go either way for you, but if you are looking for something different in the alt-pop/rock genre it’s well worth a listen. If I had to rate it I would say 4 out of 5.

For more information about Liz Phair and music samples check out www.lizphair.com.