Speed Bicycles is a new brand, it’s the newest out of the VSI family that also owns THE, Sinz, Intense and ITS Tyres. Currently they are only making the Speed M Series frames, although there is a “top secret” rolling chassis on the way (the secret was leaked some time ago -do a Google search for more information). Rumours are that it will come loaded with Sinz Elite forks, a Sinz stem and a Sinz wheel set that will have hollow 20-millimeter axles. We won’t go into any details on that here, but as you can see Speed Bicycles are all about making quality and innovative products. If other VSI brands are anything to go by, Speed is going to be another big seller. Actually the frame that we managed to obtain for this review came out of a sold out batch of frames (don’t worry, by the time you read this there will be a whole lot more). 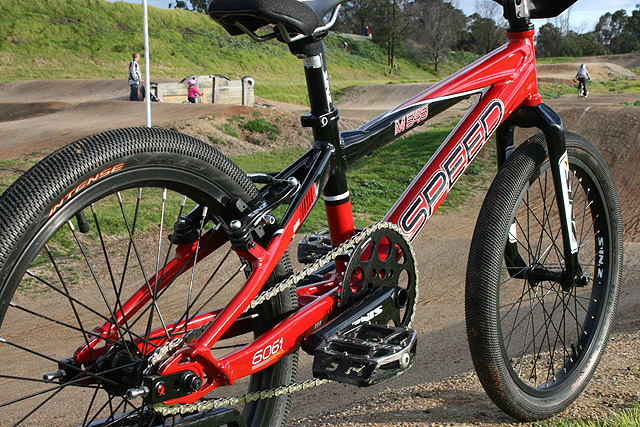 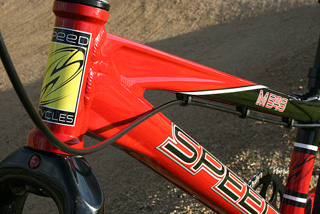 The Speed frame is loaded with hydro formed 6061 series alloy tubing, and it looks stiff and strong. The down tube is massive, and plays a big part in the make up of this frame and how it handles, which we will discuss further a little later. It has a down tube that’s similar to the Supercross G6e that we reviewed back in 2007, in that it’s shaped to ovalise at the bottom bracket shell, and it’s actually nearly as wide as the bottom bracket shell too. The hydro forming around the head tube reminds me of the current Kuwahara frames. While the chain stays, drop out, head tube and down tube look very much like the current Intense Podium frames. The graphics are reminiscent of the Norco race frames from around 2002 that Luke Madill used to race, not that it’s a bad thing, they have a simple NASCAR styling about them which rates highly in my books. Get the graphics wrong on a frame and it can make a great frame look cheap, the Speed’s graphics let the frame speak for itself. 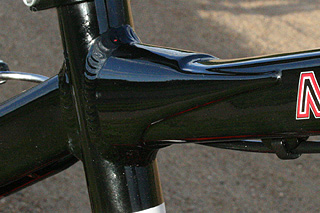 For this review the guys at ECI decked out the Speed frame with Sinz parts. Many of which I either hadn’t seen or paid much attention to before. Including the Sinz Elite forks, Sinz integrated headset, Sinz stem lock, Sinz chain tensioner, Sinz 2 piece cromo cranks, Sinz CNC chain wheel, Sinz pro lite stem, Sinz wheel set with cassette hubs and Intense Micro Knobbies, Sinz brakes, THE number plate, grips and seat. All in all the bike looked great with the red and black of the frame and all black components. I don’t know the weight but it felt pretty light considering Sinz is more of a mid range brand that offers affordable products that are pretty competitive in the strength and weight department. 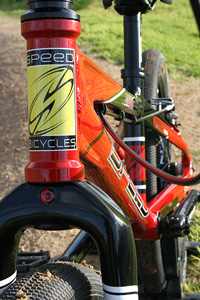 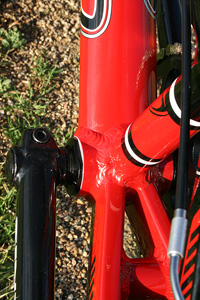 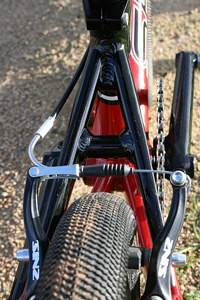 How does it feel to ride?

The first outing on the Speed was just to see how it handles on the track cornering, manualling and jumping.

I found pretty quickly that it was perfectly balanced for manualling. It was easy to find that sweet spot at any speed when pulling up through jumps and there was never any fear of looping out. Whether it was through mellow rolling rhythm sections or deep large doubles, the Speed was perfect for manualling.

Jumping took me a little longer to get used to, it might have been just the way the bars were a little higher than I was used to, because of the rise of the stem, but I was holding the front wheel too low through jumps and nose bonked a few times before just lifting the front end a little higher than I normally would. In no time I was jumping it just as well as my everyday ride.

I liked the way the Speed handles through corners, the 74° head angle is perfect. When putting the power down through corners to wind the bike up for jumps, etc the Speed felt like it was on rails.

The next outing was a gates session, to see how the bike would handle out of the gate and sprinting down the first straight, taking the jumps at race speed. That’s when I discovered exactly how stiff the frame really is. My first few gates felt like the gearing had been made harder, but it was just that there was no flex at all through the frame. The shape of the down tube, especially where it meets the bottom bracket shell, would contribute to the rigidity around the bottom bracket area, but it seems like the frame designers have considered the way the whole frame is constructed to reduce flex to absolute zero. No flex is a great thing, it means that all of the power you get down to your pedals converts to drive through your drive train to the back wheel. No power or effort in pedaling is wasted. It took me a while to get used to the front end of the bike on the gate. At first it was hard to keep the front wheel down and get good acceleration off the hill but a little more weight over the front wheel and it was fine. Taking the jumps at race speed was fine, the bike was still handling well and was very responsive through the jumps.

There were no surprises over the next few sessions, which I didn’t really need to work out how the Speed would ride, I was starting to have a bit of fun on the bike, and well, I just wasn’t ready to give it back yet… 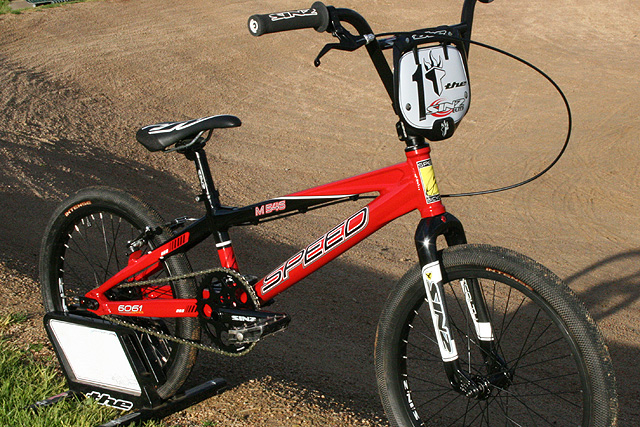 So how light are they?

The Speed isn’t the lightest frame on the market, it weighs in at about 4lbs 1oz, which is the same weight as the same sized Intense frame. Compared to the cromo S&M .38 Special and Supercross’ Bolt LT are just a little heavier at 4.3lbs. But it’s a long way short of the lightest in the market that we know of the Supercross ENVY Pro XXL frame that’s a mere 2lbs 15oz for the Pro XXL.

Each model has an M followed by a number, the number is the length of the top tube in millimeters. The XXL is a M 546. The metric measurements get a little confusing when trying to compare to most other frames because of the standard measurement being in inches. I tried to convert a few measurements to see how the Speed M series frame compares to it’s brother brand the Intense and, from rough conversions, it looks as if the geometry of the Speed matches the geometry of the Intense Podium. It appears to have the same head tube and seat tube angles, the same top tube length and the same bottom bracket height.

If my calculations are correct, that pretty much makes it race proven geometry, and a particularly good alternative to the Intense Podium for people who don’t like the new school stylings and curves of the Podium frame. I must admit I haven’t paid much attention to the Podiums myself, but was keen to check out the Speed frame.

For more information about the Speed Bicycles M Series frames check out www.speed-bicycles.com.

Speed Bicycles is distributed in Australia by Elite Cycle Imports.