I received an email a little while back from Time USA asking if I would be interested in checking out the new Time X-Roc S pedal, and of course I said yes. While I love checking out new products and sharing my findings with you the products aren’t always right for me. I faced a dilema, do I get some clip shoes for the review and finally use some clip pedals after 30+ years of racing with flat pedals? Or do I just find someone that’s tried a couple of different types of clip pedals so they had a point of reference, the second option was the obvious one. To me, although I may never use clip pedals, this is an important review. I often hear of people who try a particular pedal and clip out. If this sounds like you you should pay close attention. 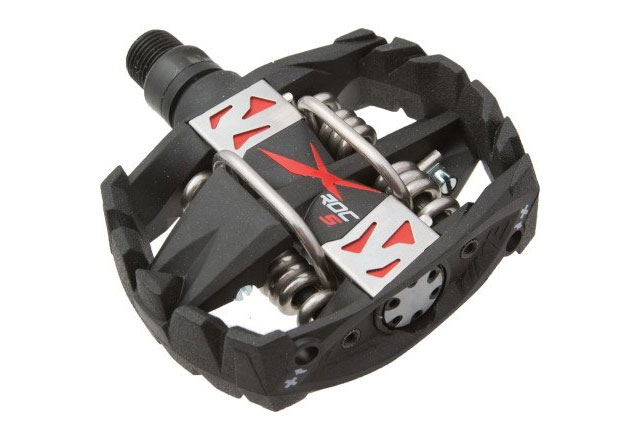 So once again we called on Dean Steele for his thoughts, this time on the new Time X-Roc S pedals.

I was asked by the bmxultra.com team to try the new Time X Roc pedals because the bmxultra.com guys are from the old school and don’t run SPD style pedals, only flat pedals. I come from a purely flat pedal back ground as a bowl rider, and even when I dabbled in downhill I was horrified to see guys clipped in and vowed I would never clip in. So picking up some pretty bad habits as a bowl rider, my foot to pedal position was terrible and my primary concern was that my heel would always clear my pegs on a street bike. BMX racing was the new passion in my life, so when I started racing my poor pedaling technique held me back and a solution was required to rectify the problem. Clipping in seemed to be the way out of my predicament so I purchased a pair of devil pedals after I vowed I would never use them.

After looking at what was on the market I decided a pair of Shimano DX pedals would do the job so on the bike they went. The pedals never gave me sense of feeling 100 percent comfortable I would un-clip coming out the gate or when I least expected. These pedals, as I later found out, have a degree of float, what is this float I thought? I just assumed all clip pedals locked you in and restricted foot movement, these pedals allowed movement and this did not quite compute, as I was clipping in so I didn’t move.

The home work began, I needed to find a different style of pedal. Speaking with a few people there were a lot of pedals on the market. The majority of people had Shimano and Sinz, than I found the boutique pedals which I classed the Crank Brothers and the Time range of pedals in, they are a bit more expensive. Two of my good riding companions, who are both mountain bikers one a mad downhill rider and the other a cross country freak when not racing BMX. Both suggested Time or Crank Brothers as they were both a unique design and had an awesome feel in the float of the pedal. They both described the pedals as feeling like the closest thing to running flats as you could but being clipped in. Shying away from anything with float I rode a friend’s bike with the basic plastic cage Shimano SPD pedals, I was finally at home as they had no float. It felt like my shoe had been screwed directly to the pedal this eliminated all the un-clipping issues I had been encountering, so a pair were purchased.

So in making a short review long here I stand with a pair of Time pedals to have a play with. As you do with a new pair of pedals you pull the instructions out and skim through to find the easiest way to set them up without being bombarded with useless warnings and mind numbing statistics. Time instructions are great they are clear and don’t leave you second guessing on how to set them up correctly. The cleats are brass which would be my only concern, being it is such a soft metal, my mind set would lead me to believe they would wear rapidly. In talking to my mountain bike colleagues, they tend to get a solid year out of the cleats and that they wear no worse than a Shimano cleat. That is fine for adults but I would be reluctant to put then in the hands of a child as they have super hero like powers in destroying clothes and foot wear. 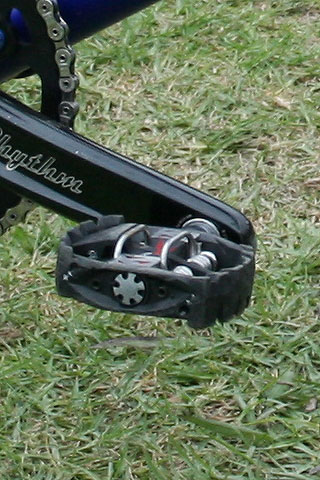 The cleat if installed one way will give you more float than if it is spun and bolted down the opposite way. This is a great design and works very well. The pedal itself is designed for more of the shoe to make contact on the flat surface of the pedal and allows you to move naturally whilst being clipped in. The pedal design allows itself to clear any mud or debris out before locking in which a typical Shimano will not. Many a wet race meeting you will see parents running around armed with screw drivers and sticks cleaning out kids shoes and pedals clearing mud and stones which have built up stopping the mechanism from clipping together. This is much to the amusement of the old flat pedal traditionalists who often comment that this wouldn’t happen if you rode flats. But not to be said for the Time set up.

After removing my current Shimano SPD pedals, I noted straight away there was a notable weight difference with the Time pedal being heavier. I cannot give you specific figures but I can say that the construction is far superior of the Time pedal and well worth the gain and we are probably talking grams and by no way suggesting kilos. You could also liken it to having a weighted fly wheel on a v8 thus producing more torque to keep all you spinners spinning. I would say on a more serious note that the weight would be in the pedal spindle and bearing set up which is like playing with a Profile elite hub you just sit there and spin the pedal and feel the craftsmanship in how well built these pedals are made.

The first few rides I did on these pedals the spring tensions were wound right of just to get the feel of how these pedals worked. Clipping in and out of these pedals was weird at first as you seem to either be in the sweet spot or not, but after half an hour I didn’t even think about this anymore and it was just natural. Now feeling more comfortable I wound up the spring tension to see what the difference would be and being brave I went straight to setting three the hardest setting. Clipping in went from a notable click to a definite snap and you could really feel the difference in the setting. These pedals are very easy to set the spring tensions on as there is one well protected screw it body of the pedal to adjust. As noted there are three possible settings with one being the easiest to three being the hardest spring tension. These pedals are far easier to set than any Shimano as there is no possible way to miss count clicks when adjusting. The adjusting screw is less likely to foul with mud being located on the side of the pedal body.

After racing the Track Attack series in the pedals I must say I fell in love with them for so many reasons. Firstly, my mountain bike friends were right these pedals are the closest things to riding in flats that you can get from a SPD pedal. The amount of natural movement you get is awesome you can shift your weight if you pull a dud manual, I found them particularly good for changing direction in corners, you can really roll your foot around on the pedal without the dreaded un-clip. Secondly, these pedals were the end of sore knees after racing with the ability to move due to the floating system it creates more natural movement when riding. And lastly when you roll into the gate and clip in that snap snap from the shoe connecting to the pedal is a very positive sound which gives you piece of mind for when the gate drops.

The Time pedals are traditionally not a cheap addition to your bike, but I can honestly say they are worth every dollar and I will be purchasing a pair for my bike. I did refer to them as a boutique pedal and rightly so, if you can get your head around a few extra grams and a few bucks they make the riding experience more enjoyable.

Reviewed by Dean Steele and Shane Jenkins/bmxultra.com May 4, 2012