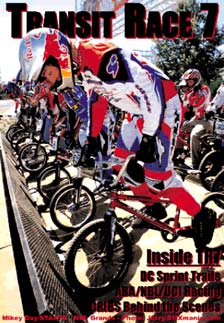 The seventh installment of the Transit Race DVD series will not disappoint BMX race fans. It documents the 2005 US Summer races from right across the country, in both the ABA and NBL sanctions. The TR7 DVD features the 2005 UCI worlds at Paris and the 2005 NBL Grand Nationals, two of the biggest BMX races in the world today.

Transit has a pretty slick formula, that many of you would have grown accustomed to, with lots of racing and some dirt jumping sprinkled throughout. If you have felt let down by previous Transit releases, Transit 7 is probably their best yet.

I don’t know about the rock, paper, scissors competition, it’s about as exciting as watching a bunch of guys slide around in the mud, but the chapter control means you can just skip it and get back on with the racing action in no time.