It’s difficult to think about the BMX handle grip market without ATi, they have built up quite a name over their years in the industry. Just when I thought ATi had a range of grips that would suit anyone and everyone they come out with two new 1-ply styles; the Orbit and the Pro-Spike. We are looking at the Orbits in this review. (For the newbies, 1-ply basically means a single layer of rubber. Take a look at our ATi Jackson grips review for an example of a 2-ply grip.)

I must admit I am a big fan of the 2-ply, especially the ATi Jackson’s, because of my large hands, but thought I’d try the Orbits out for myself. 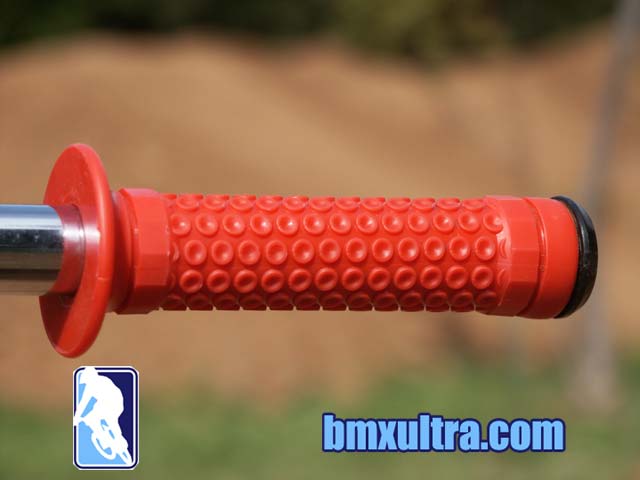 I’ve been racing BMX since 1981 so I have seen a lot of grips along the way. When I first saw the Orbits they reminded me of an old-school style of grip that I think were called the Oakley B2s, but they have been widened and modernised with hard plastic handlebar ends and channels to lock your grips on extra tight with wire or nylon ties. Looking at the Orbits still in their packaging they give the impression that they would be quite hard and cause blisters for sure, but that’s far from what I discovered. Once installed the ATi Orbits feel quite soft, soft enough in fact to use without gloves and you wouldn’t even have to worry about a wearing in period. While the Orbits are certainly wide enough for a big hand they are thinner than most 1-ply grips so would also be a good grip for juniors and female bmxers.

I have been using the ATi Orbits for months on my cruiser over the winter in my backyard track. Even after a few crashes I am still yet to damage them and I haven’t once noticed throttle grip. The grips did soften up a little more over time and lost their plastic/glossy look that they had when they were new.

The ATi Orbit grips are available in red (as above), blue, black and yellow.

Check www.rideati.com to find out more about ATi’s product range.