S&M have been manufacturing fine BMX products in the US since the late 80’s. However most serious bmxers (and some not so serious) could only say they have gone as far as using S&M’s lock-on grips, handlebars or maybe even their forks. In comparison to more mainstream brands few riders have stepped onto an S&M race frame, particularly since the market seems to have pushed to alloy frames over the past decade. (That trend seems to be changing now.) Another reason could be that S&M are very proud of their products, proud to a point that they use the best materials and more skilled labour to create the best products. In turn making them a little more expensive than others. To put it into perspective though, you get what you pay for. I know I would prefer to cough up a few extra dollars for a superior product, and compared to other US made frames they are still very competitive. 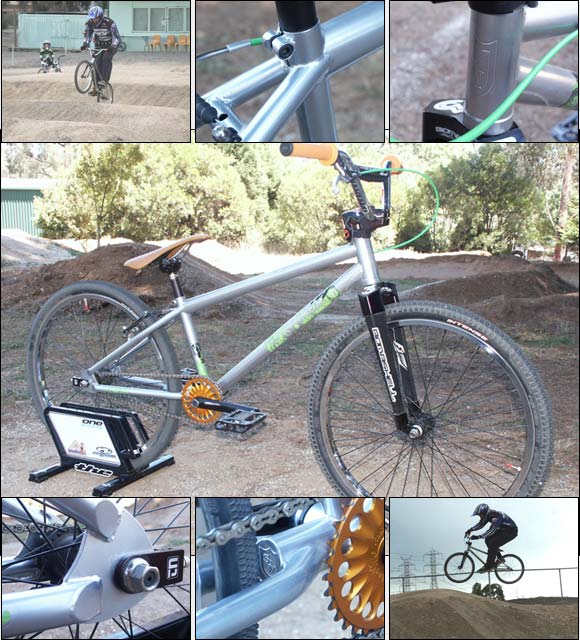 Impressed with findings of recent reviews of S&M products like the race bars, race forks and the new 4Q XLT pitch forks I jumped at the opportunity of reviewing S&M’s .38 Special cruiser frame. The S&M .38 Special comes as a frame only, so the guys at ECI built up a complete bike from parts they distribute, and their build was sweeter than honey. S&M bars, a THE lux seat, profile cranks, SunRingle Rhino Lite rims and TufNeck cassette hubs, Intense tires, Funn platform pedals, Perv seatpost, the new S&M race XLT stem and Bombshell F1 forks. Ok wait, carbon forks, on a cromo frame? I have a feeling that the type of person who would buy a cromo frame would normally also go for cromo forks, but it was nice to finally check out what all the fuss was about with the Bombshell F1’s. They are a very stiff, “solid” set of forks.

At 6’2″, and based on my first impressions, I thought I would be in for a cramped and uncomfortable ride and would have to adjust, or even replace, the handlebars and maybe drop a longer stem in to get a better feel. The frame looks short, but I later found out it has a generous 21.5″ top tube, so I couldn’t have been more wrong. On my first lap of the Northern Park track, without changing a thing on the bike, I was manualling the tough rhythm section and jumping nearly everything in sight right from the get go. The geometry feels perfect in every situation including; cornering, tight rhythm and getting air over larger jumps. The ride was very comfortable, even to a point where I would say the .38 is an absolute pleasure to ride. On the track it accelerates well, I didn’t feel any flex that is often associated with cromo frames. My next test was to take the .38 to the backyard track we used for BSX this year. It’s a short, tight track and is a cross between a race track and dirt jumps, not exactly easy to ride it certainly keeps you on your toes, and it’s far better suited to a 20″ than a cruiser. Again the .38 passed with flying colours, actually I found that I was jumping everything a touch further than I do on my own cruiser and was able to carve the corners better, laying down some good laps.

If I was in the market for a cruiser right now I would buy the S&M 24″ .38 Special, not only based on how it rides but also how it looks. I was saying how proud S&M are of their products earlier, and so they should be. Not only is this frame up for the job, it looks fantastic. Although, saying that, I am not entirely sold on the silver colour, lucky they also have a black or a yellow colour option.